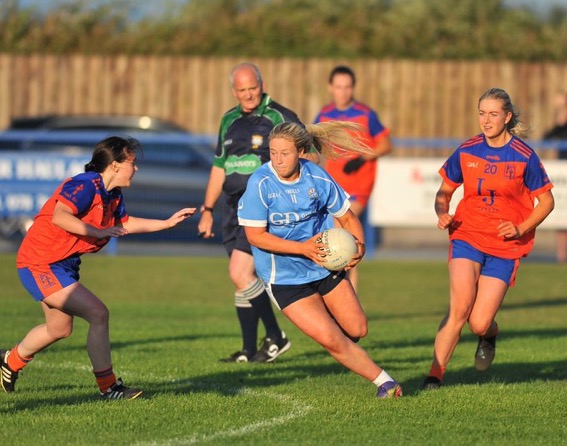 Clonoe Ladies continued their Patrick Fahy & Co. Solicitors Senior League campaign at the weekend with a game against Clann na nGael at Páirc Uí Rathaille. On what was a sunny summer’s evening, both clubs put on a very entertaining and enjoyable game of football.

Clonoe opened the scoring through an Eimhear Cushnahan point. Clann na nGael responded with two points before Aoife Coyle found the net for Clonoe. Orlagh Gavin scored her first point of the game before Clann na nGael scored another point. Orlagh Gavin scored another 1-01 before the first water break to stretch the Clonoe lead to 6 points. Clonoe registered another four points in succession after the restart through Orlagh Gavin (2), Niamh Donaghy and Aoife Coyle. Clann na nGael started to dominate the game just before half time scoring 2-02 to no reply to cut the half time lead to 2 points and were unlucky not to have another couple of scores when a couple of goal bound bound efforts came back off the cross bar.

Moy and Ardboe played out an entertaining game at the weekend before the loughshore girls emerged victorious 4-6 to 0-5. Two first half penalties from Erin Forbes put Ardboe in control of the tie. A yellow card and 10 minute sin bin for Moy’s Emma Conroy approaching the end of the half made it difficult for Moy to close the gap.

Ardboe continued to push on in the second half and further goals from Forbes and Cara Mulgrew ensured victory for the Loughshore girls.

Killeeshil had plenty to spare against neighbours and rivals Macartans. The Clogher Valley girls had a very young side out but Killeeshil were on top from the start and won convincingly. Macartans struggled for scores and scoring options and had only points from Colleen McQuaid free scorer and Tara Meabh McCarroll to show for their efforts. Killeeshil midfielder Alanna Donnelly was outstanding for her side throughout the game as well as adding four fine points. Grainne Rafferty (5), Ciara Donnelly (3) and Zoe Loughran (1-0) were also on target for the winners. Final score Killeeshil 1-12, Macartans 0-3.

Donaghmore made the long trip down to Aghyaran but found the home side in determined mood as they regrouped after last week’s crushing defeat by Killeeshil. Aghyaran were first to the ball all over the field and after a competitive opening thirty minutes they led 3-09 to 1-2 to at the break.

Both sides hit early scores at the start of the second half but a converted penalty from Michaela Mc Guigan gave Donaghmore renewed hope. Things changed after the water break when Aghyaran found the net on three occasions adding a handful of points couple points to claim the win on the night.

The score of the night  came in the 1st half  from Aghyaran’s midfielder Aoibhinn McHugh. After winning a ball in her own defence, playing a series of one twos up the pitch & finishing with a great ball into back of the net.

Cookstown locked horns with Aodh Ruadh and in spite of a spirited showing found the Dungannon girls a bit too hot to handle.