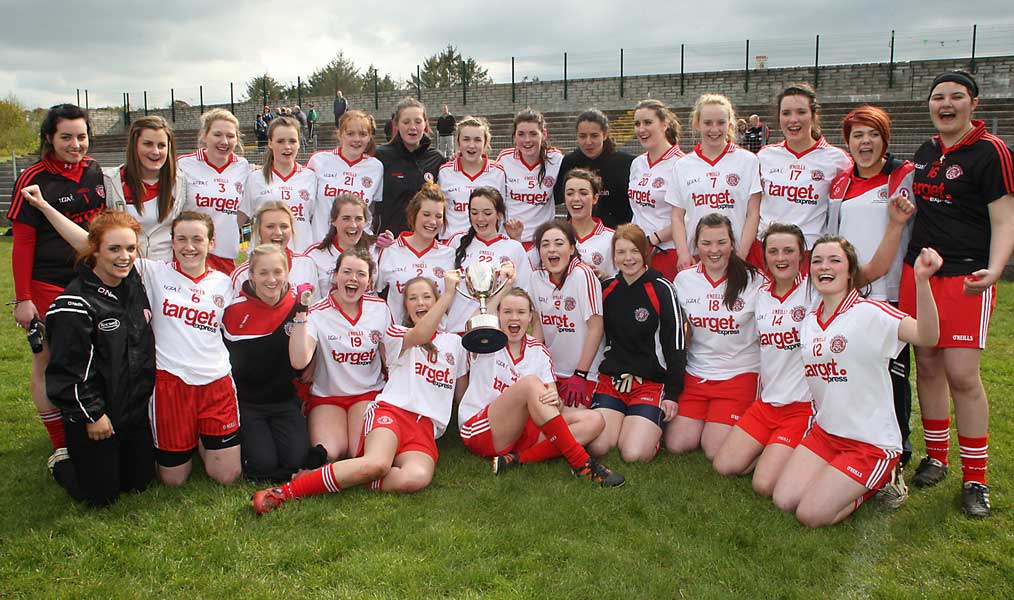 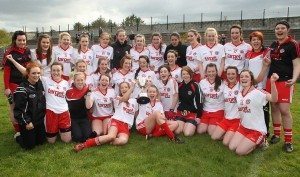 There will be lots of interest in the outcomes of the two games taking place at 3:30pm this afternoon. Tyrone Minor Ladies team are in Monaghan hoping to win back to back Ulster titles when they take on a revitalised Donegal side. Meanwhile at Ballinamullen a depleted Killyclogher side will go in search of two points as they host Ardboe in the only league game of the afternoon. We will keep you informed of all the scores and main talking points from both games as they happen.

Tyrone ladies have made a good start and with nine minutes gone in the first half the young Red Hands lead 0-4 to no score with their opening points coming from Louise Kelly (0-2) and a point each from Laura Mc Sorley and Michaela Mc Guigan.

Sixteen minutes in and Tyrone continue to play well. however a Donegal goal against the run of play leaves the score Tyrone 0-7, Donegal 1-2. Tyrone’s other scorers were Laura Kilpatrick, Caoileann Kelly and Anne Scullion.

Perfect response from Tyrone a goal from Caoileann Kelly on 19 minutes makes it 1-7 to 1-2 for Tyrone and restores Tyrone’s five point lead.

With 26 minutes gone Tyrone increase their lead by two points 1-9 to 1-2 in what has been a very good start by the defending champions with those scores coming from a Louise Kelly free and a point from Michaela Mc Guigan.

With half time rapidly approaching Tyrone grab the game by the scruff of the neck with a Laura Mc Sorley goal to lead 2-9 to 1-2.

Another Tyrone goal this time from Michaela Mc Guigan puts the Red Hand girls in a very strong position heading into the break leading 3-9 to 1-2.

Meanwhile at Ballinamullen it is a point apiece after 7 minutes . Tommy Mc Guigan opened the scoring for Ardboe only for Dermy Carlin to level it for the home side.

Fifteen minutes in and after several bad wides from both teams Ardboe full forward Matty Bell puts his side in front 0-2 to 0-1.

Mick Hagan converts a 45 and it is now 0-3 to 0-1 in favour of the visitors but almost immediately Bell finds the net and Ardboe lead 1-3 to 0-1 with twenty minutes of the first half played.

Meanwhile we are back under way in Monaghan and Tyrone open the scoring in the second half with a point from Laura Mc Sorley after three minutes. Tyrone now lead 3-10 to 1-2.

Leo Meenan hits Killyclogher’s third point of the day to close the gap to four.

In Monaghan Michaela Mc Guigan extends Tyrone’s lead to 3-11 to 1-2 with another fine point.

Tyrone Minor girls playing well and with confidence and look like they are on course to defend their provincial title. However they still have over twenty minutes of this game remaining and a couple of quick Donegal goals would change the complexion of the game in a big way.

Simon O’Neill with a thirteen metre free and it is now a three point game at Ballinamullen 1-4 to 0-4 for Ardboe.

Did we speak too soon? A goal from Donegal and the comeback could well be on. The score now reads Tyrone 3-11, Donegal 2-2.

Mick Hagan with a free extends Ardboe’s lead only for Leo Meenan with an excellent free from forty yards to make it a three point game again. It could have been even better for Killyclogher when Simon O’Neill blasted straight at the keeper when through one on one. Half time score Killyclogher 0-5, Ardboe 1-5.

Donegal have added another point to their total in Monaghan but they have had a player sin binned and with just over ten minutes plus injury time left Pius Fox must be starting to relax.

Laura Mc Sorley extends Tyrone’s lead with another fine point and it is now 3-12 to 2-3 in favour of Tyrone.

We are underway again at Killyclogher as the home side attempt to chase a three point half time deficit.

Well it looks like game, set and match for Tyrone as Emma Louise Mulgrew hits her team’s fourth goal of the day and surely there is no way back for Donegal this time.

Ardboe open the scoring in the second half with a point from big Martin Mc Keown and the lead is now four points. Killyclogher reply with a point of their own from Simon O’Neill and it is once again a three point game.

Leo Meenan converts a 13 metre free and the gap is now two points.

Tyrone Ladies Minor side are the 2012 Ulster champions following this very convincing 4-13 to 2-5 win over Donegal and successfully defend the provincial title they won last year in Irvinestown against the same opposition. Congrats to all involved.

Another point from Martin Mc Keown and the lead is back up to three points in favour of Ardboe. But Leo Meenan does well with a 25 metre free and it is a two point game again.

The same player is villain and hero in the space of a few minutes missing a fairly straight forward free before converting a more difficult chance to leave a point between the sides.

James Carlin brings the sides level with a great score from thirty five yards out. It is now Killyclogher 0-10 Ardboe 1-7.

Midfielder Ryan Mc Aleer continues Killyclogher’s revival with a fisted pointed to put Killyclogher ahead for the first time. Leo Meenan makes it a two point lead with time almost up but Mick Hagan’ s late free leaves a point between the sides.