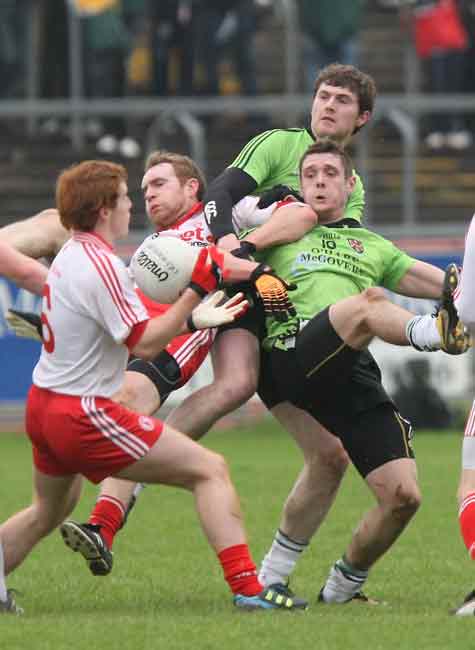 In the end it was a fairly comfortable victory for Tyrone but the score line was rather flattering to them considering the number of goal chances that the students missed. Tyrone’s new look side performed quite well with debut boy Johnny Lafferty settling quickly to the task and hitting several fine scores. The Red Hands did look rather rusty at times bit the triple change midway through the second half gave mickey Harte’s side great impetus and following Ronan O’Neill’s goal they strolled to a comfortable win. Certainly there will be much tougher challenges ahead but with Peter Harte, Aidan Cassidy and Sean O’Neill in fine form and Justin Mc Mahon playing with authority in addition to the young lads showing up well, the manager will feel it was a more than satisfactory afternoon’s work. 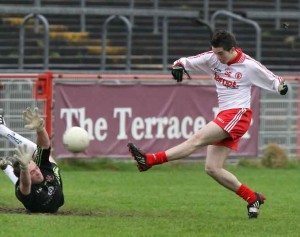 The full time whistle blows and Tyrone win 1-13 to 1-05.
There will be two minutes of additional time but it looks as if Mickey Harte’s new look side will start the season with a fine but hard earned win.
A foul on Ronan O’Neill sees Tommy Mc Guigan knock over his third free of the day followed by a fine score from play by Aidan Cassidy as Tyrone move 1-13 to 1-05 ahead with 35 minutes of the second half played.

A brilliant run and finish from Peter Harte on 32 minutes puts Tyrone further ahead, real class from a classy player. Queens respond with a point from wing back Timmy Hanna. 1-11 to 1-05.

An excellent run by Niall Mc Kenna in the 28th minute sees him finish a fine move with a fisted point to put Tyrone 1-10 to 1-04 ahead.

A fine strike from a Peter Harte 45 metre kick puts Tyrone further ahead and with 26 minutes on the clock they now lead 1-09 to 1-04.

Colm Cavanagh finishes off a fine move to put Tyrone 1-08 to 1-04 ahead and with twenty minutes on the clock Tyrone are well placed to go on and win this one, but the students are continuing to work hard.

Apologies folks major problems with internet Queens went ahead through Sean Warnock but Johnny Lafferty drew it level with a fine point, his third of the day. three changes from Tyrone saw the introduction of Ronan O’Neill, Dermot Carlin and Niall Mc Kenna and O’Neill’s first touch is a goal to put Tyrone !-07 to 1-04 ahead. 18 minutes on the clock.

Queens start with a bang and a great goal from Caolan Rafferty inside the first minute draws them level. Tyrone almost snatch the lead when Micky Murphy is put clean through by Martin Penrose but blasts wide from ten metres. 0-06 to 1-03 with 7 minutes of the second half played.

It does not look like there are any changes on either side as Tyrone now take to the field.
Queens and the match officials are back out on the Healy Park but as yet the Tyrone team are still snug in their changing room.
A very good attendance at the game today with approximately 2,000 watching the first game of the 2012 season.
Tyrone ladies lead Down 3-06 to 1-06 at half time in their game at Trillick.
The rain starts and the ref shows another yellow card this time to Tyrone forward Matty Donnelly as we head into additional time and Martin Penrose, captain for the day hits over Tyrone’s sixth point of the day. Half time score 0-06 to 0-03 in favour of Tyrone.
Colm Cavanagh is woefully wide from ten metres with Johnny Lafferty standing free inside. Poor decision making and rather selfish play from the Moy man as the clock ticks past thirty minutes. 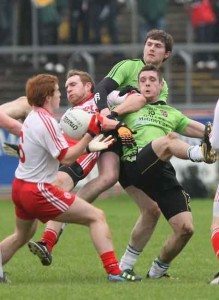 The anticipated battle between Enda Clarke and Justin Mc Mahon will have to wait as the big Greencastle man is foraging away in the middle of the park.
Mc Niece picks up a yellow card for a pull on Owen Costello and almost immediately Aidan Cassidy picks up a yellow card for a high challenge with four minutes remaining.
Tyrone attack and Lafferty wins a free which is confidently converted by Tommy Mc Guigan puts Tyrone two ahead again 0-05 to 0-03 with 23 minutes on the clock.
A Gregory Jordan effort is brilliantly saved by John Devine before Mark Sweeney drives the rebound over the bar to narrow the gap to a single point.
Enda Clarke picks up the second yellow card of the day following a high tackle on Colm Cavanagh. Twelve minutes of the first half remaining and Tyrone still 0-04 to 0-02 ahead.
Brilliant move by Queens matched only by a fantastic diving save and clearance from full back Justin Mc Mahon to deny O’Hare a goal and Tyrone break up the field to see Aidan Cassidy knock over their fourth point from forty metres.
Queens have the chance to draw it level but Ryan Jones is wide with a free from 45 metres.
It is Johnny Lafferty with his second score a fine right footed strike. 0-03 to 0-01 but Queens respond with a fine flowing move and a great save from John Devine following O’Hare’s shot leaves it 0-03 to 0-02 with 13 minutes on the clock.
First yellow card of the day goes to Sean Warnock for a foul on Colm Cavanagh and Tyrone come close again through Matty Donnelly but no change in the score with 10 mins gone.
A foul on Aidan Cassidy and Tommy Mc Guigan converts while debutante Johnny Lafferty makes his mark with a fine fisted score to put tyrone 0-02 to 0-01 ahead with 6 minutes played.
First attack and wide for Tyrone from Michael Murphy and Queens open the scoring with a fine left footed point from Donal O’Hare. Three mins gone 0-01 to no score for the students.
It appears there are two changes on the Queens team with Sean Finch 7, replaced by Paul Mc Guigan 17, while James Kielt 11 is replaced by Tyrone man Gregory Jordan. A change in the numbers too sees Sean Burke wear 28 instead of 9.
As both teams go through their warm ups, it would be fair to say that we have a reasonable crowd here at Healy Park and no doubt the mild weather has contributed to that. It is grey over head but no sign of any rain.
QUB, if they go as selected, will have two Tyrone players in their line up. They line out on the match programme as follows: 1 Matthew Jackson, 2 Niall Mc Govern, 3 Sean Warnock, 4 Owen Costello, 5 Timmy Hanna, 6 Brian Cox, 7 Sean Finch, 8 Ryan Jones, 9 Sean Burke, 10 Mark Sweeney, 11 James Kielt, 12 Jamie O’Reilly, 13 Donal O’Hare, 14 Enda Clarke, 15 Caolan Rafferty. Should there be any changes we will bring them to you.
Teamtalkmag.com will be LIVE in Healy park from 1.30pm on Sunday afternoon to bring you all of the latest team news as we prepare to get stuck back into the action.  Rumour has it that Greencastle men Sean Warnock and Enda Clarke may start for Queens and if so Sean is likely to pick up Tyrone debutant Johnny Lafferty.  That could be an intriguing battle in what is a very important game for some of the Tyrone lads.  An opportunity to play in a Tyrone senior jersey doesn’t come around everyday so it will be interesting to see who steps up to the mark.
1 John Devine – Aireagal Chiaráin
2 PJ Quinn – Baile na Móna
3 Justin McMahon – An Omaigh
4 Damian McCaul – Domhnach Mór
5 Sean O’Neill – An Droim Mór
6 Peter Harte – Aireagal Chiaráin
7 Stephen McNally – Oileán a’Ghuail
8 Aidan Cassidy – Eochar
9 Colm Cavanagh – An Mhaigh
10 Matthew Donnelly – Trí Leac
11 Martin Penrose – Achadh Uí Aráin
12 Michael Murphy – Gallbhaile
13 Patrick McNiece – Oilean a’Ghuail
14 Jonathan Lafferty – Urnaí
15 Tommy McGuigan – Árd Bó
17 Dermot Carlin – Coill an Chlochair
18 Conor Clarke – An Omaigh
19 Kyle Coney – Árd Bó
20 Ciaran Gervin – Doire Locháin
21 Peter Hughes – Eiscreach
22 Aidan McCrory – Aireagal Chiaráin
23 Niall McKenna – Domhnach Mór
24 Ronan McNamee – Achadh Uí Aráin
25 Stephen McNulty – Cluain Eo
26 Ronan O’Neill – An Omaigh