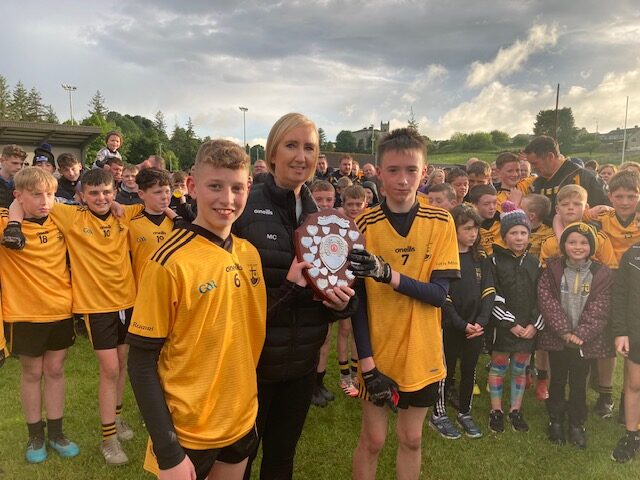 Loughmacrory lifted the Grade 1 Under 13 league title after a 2-8 to 2-4 win over Dungannon at Clogher on Thursday evening. Both teams deserve great credit for the quality of their play but it was the Loch lads ability to make the most of  their scoring chances that made the difference.

The Clarkes took time to settle and ten minutes in they found themselves 2-2 to no score behind having missed several good scoring chances. Loughmacrory were much more efficient with their chances and possession. Midfielders Ciaran Mc Crystal and Lorcan Meenagh were central to most of what their team did well and were always available for their team mates when required. Mc Crystal and Damhan Meenagh scored points before goals from Lorcan Meenagh and Michael Mc Crystal put Loughmacrory 2-2 to 0-0 ahead. 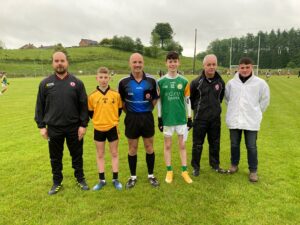 Dungannon had chances but finally broke their duck after fifteen minutes when Senan Mc Cann pointed. Loughmacrory responded with a fine point from Ruairi Mc Namee but the Clarkes finished the half strongly with a goal from team captain Eoin Spence and a point from Corin Kelly to leave the half time score 2-3 to 1-2 in favour of Loughmacrory.

Ciaran Mc Crystal opened the second half with a point for the Loch before Senan Mc Cann replied for the Clarkes. Loughmacrory found themselves under pressure as Thomas Slater, Donnacha Mc Hugh and Fionn Kelly poured forward. Loughmacrory dug deep with Hugh Duff, Tiarnan Mc Aleer and goalkeeper Aidan Mc Elduff defending superbly. Lorcan Meenagh (2) and Mc Crystal pointed to stretch the loch lead but Dungannon pressure resulted in an own goal and suddenly the gap was down to four points. The Clarkes upped the ante and hit the crossbar, had one cleared off the line and were denied by a brilliant save from goalkeeper Mc Elduff. Meenagh and Mc Cann added points for their respective sides as the game entered the closing minutes. Dungannon pushed for the goal that would have given them hope but with Mc Crystal and his midfield partner Meenagh leading the way Loughmacrory saw out the game and deservedly claimed the title on a final score of 2-8 to 2-4.