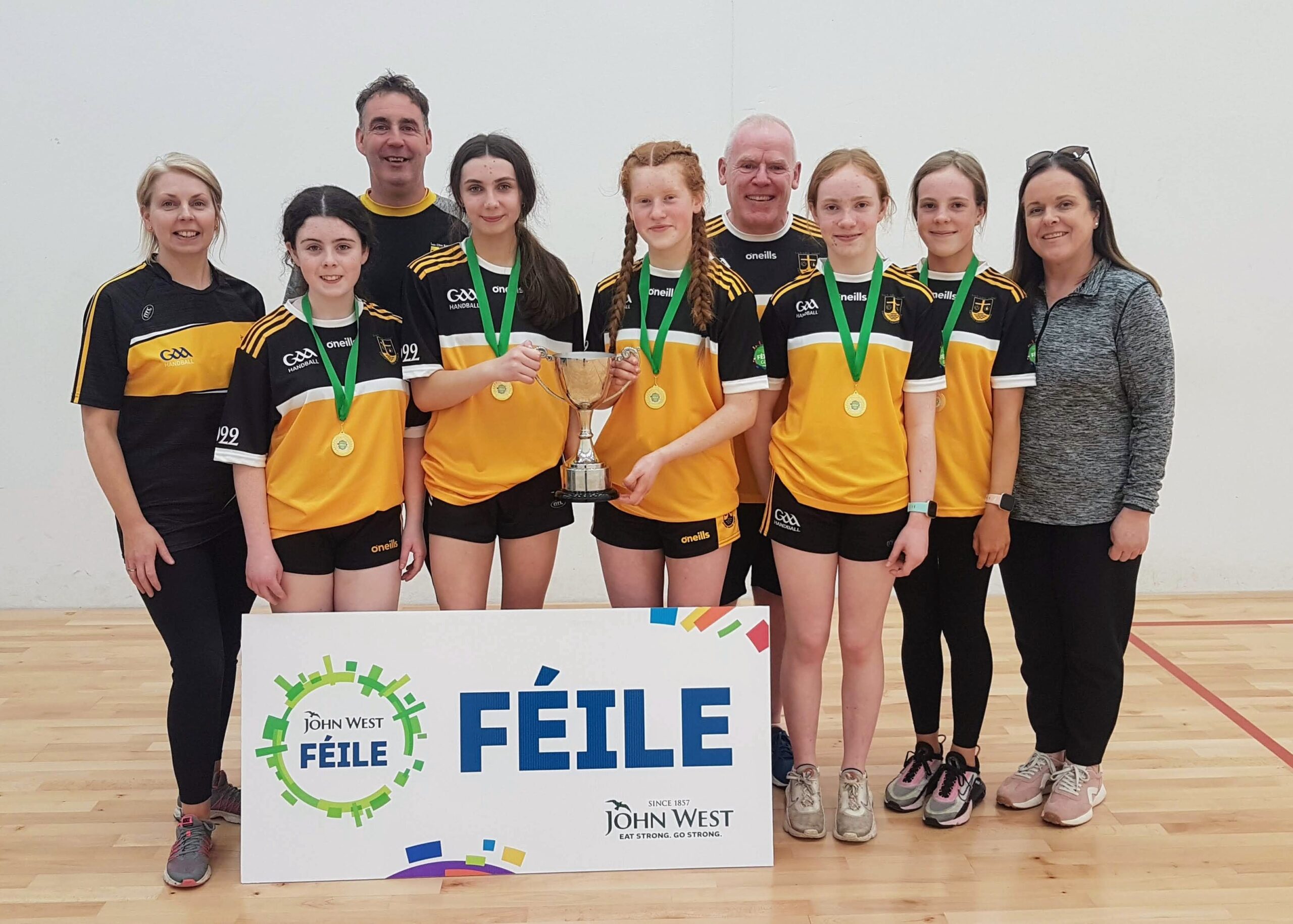 The Loughmacrory girls under 15 handball team created history last weekend when they brought the All Ireland girls division one feile title back to Tyrone for the first time with an historic win in Kilkenny. 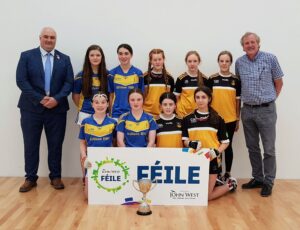 The club’s record of participation and achievement in feile is a very impressive one and it was maintained on Saturday as the girls captured the All Ireland title in brilliant style.
Three years ago Loughmacrory returned home from Cork as All Ireland boys division one feile champions following a memorable success and as that cup was finally handed over to new winners in Kilkenny at the weekend, it was replaced with the girls cup as Loughmacrory captain Laura Duff lifted it proudly on Saturday in Kilfane. 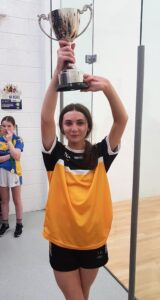 That 2019 boys team was captained by Gary McAleer and also included Eoin McElholm, Ruairi McCullagh, Thomas Duff and Dearbhail Fox and that successful group went on to claim the Ulster Herald young team of the year award as they were the first ever winners of the feile division one double in 40×20 and 60×30. 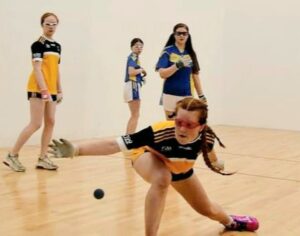 Unfortunately there was no competition since then and the Loughmacrory boys team were forced to miss this year’s feile due to a clash with Confirmation.
However Loughmacrory were still represented in the division one girls competition and hopes were high as Laura Duff, Lucy McCullagh, Cliodhna Toner, Aine and Orla Curran headed off to play against tough opposition in Kilfane.
The club had come agonisingly close to the girls division one cup six years ago when the team captained by Mairead Fox lost the final in Tipperary to Tuamgraney from Clare on a scoreline of 26-25.
There was a real determination to make it happen this time and in the round robin games the girls enjoyed superb wins over Kilfane (40-22) and Kells (42-34) which clinched their place in the title decider.
Laura and Cliodhna were paired together for every match and Lucy and Aine teamed up for every outing and it was working  very well. However things were exceptionally tight against Kells from Kilkenny as the Lough girls had to come from behind to win 21-19 before sealing their place in the All Ireland final, the result also ensuring their final opponents would be Kilfane instead of Kells.
With the added pressure of an All Ireland Cup at stake, it was going to be tough in the All Ireland decider with the home crowd cheering on the local team.
Lucy and Aine faced a daunting challenge against the talented Katie Jordan and her partner in the opening tie of the final and after some terrific rallies, Loughmacrory went down on a scoreline of 21-11 against the stronger of the two Kilfane pairings.
It was a great end to the day for Lucy and Aine as they had been involved in three of the most thrilling encounters of the day against the All Ireland U15 singles champion from Kilfane and the All Ireland U15 doubles champion from Kells.
Lucy certainly enhanced her reputation significantly as a real up and coming talent with her retrieving and finishing.
Laura and Cliodhna were favourites to win the second game of the final but they had to limit the number of Kilfane points to 10 in order to secure an historic aggregate victory.
It took a while to get going and it was Cliodhna who then produced a stunning sequence of serves to chalk up the vital points to help them settle.
As Loughmacrory began to open up a commanding lead in game two, Laura was soon showing why she has emerged as the leading female juvenile player in Ireland this year with an exhibition of serving, roofing and kill shots.
Once Laura and Cliodhna got into their stride, there was no stopping them and they finished the job off in style to complete an outstanding 32-22 result for their team.
The Loughmacrory contingent enjoyed the celebrations before making the long journey home with the cup.
This latest history making triumph means that Loughmacrory’s recent record in feile competition makes impressive reading.