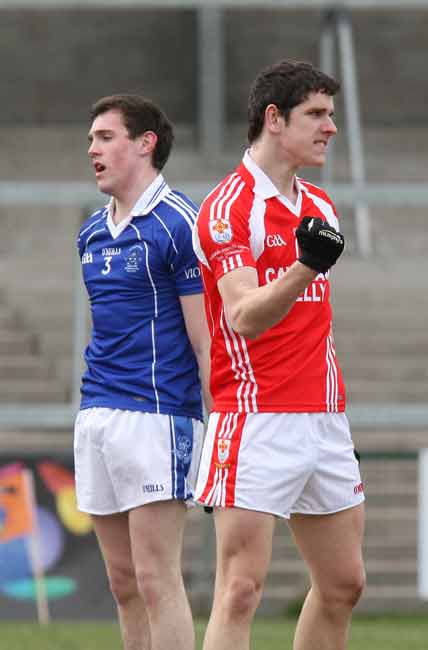 Newry win the title with a slightly better side on the day, unlucky Dungannon on the day. 2-9 to 2-8 in favour of St Colmans Newry as they lift their 19th title .

Two minutes of additional time in Armagh and Liam Gervin has a free from thirty metres, one point between them in favour of Newry.

Two points between them as Mc Ardle points for Newry

Gamesmanship from Colmans to run the clock down and Conor Mallon comes on for DUNGANNON.

Liam Gervin has a difficult chance from a free but it just misses the posts.

Four minues remain and all to play for.

Cometh the hour cometh the man and Mc Garrity sticks one in the net, suddenly there is life in Dungannon yet. 2-8 to 2-7 Newry still lead.

Morgan extends Colmans lead with a punched effort, Dungannon four behind look tired and in need of inspiration.

Mc Garrity comes on for Barker and less than ten to go as Dungannon go in search of a score.

Twelve minutes to go and Gervin misses a chance to narrow the gap.

Gervin has a chance to close the gap but the ref calls a square ball and Haughey extends the lead at the other side with his first score of the game. Colmans 2-7 to 1-7.

Fabulous goal from Moony and Newry move ahead 2-6 to 1-7, great goal. Dungannon need to respond.

Controversial score for Newry as the ref gets it wrong but the score counts and there is one between them.

Sean Quinn moves forward in support of the attack and knocks over a fine left footed score and Dungannon move two ahead with ten minutes on the clock.

The wind has certainly picked up and Dungannon are having to work very hard to make progress. Ryan Devlin strikes a fine right footed shot over the bar and Dungannon move a point ahead 1-6 to 1-5.

Marvellous response from Gervin as he draws the sides level again 1-5 apiece.

Colmans open the scoring with a great point from Jerome Johnston. 1-5 to 1-4 Newry lead

Ryan Devlin has a late chance to edge his side ahead but it is well wide as is Kiefer Morgan with another chance from play. The referee brings it to a close with the sides level on 1-4 each but St Colmans will be the happier side going in at half time as they will have the breeze behind them in the second half and Johnston and Moony looking very dangerous in the forward line.

Jerome Johnston should have scored a goal but poor balance lets him down and Dungannon are lucky to be just level with two minutes left to half time. 1-4 each.

Mooney closes the gap to a point after good possession play by the Newry side, 1-4 to 1-3 with 5 minutes to half time.

With seven minutes left Conlan has a chance for a point but it goes harmlessly wide.

A Jerome Johnston free closes the gap to two points.

Stefan Laverty misses the chance of the game and the ball just misses the post but it really should have been a goal but Harry Og Conlan gets another chance and this time there is no mistake as the Edendork man nets on 18 minutes, Dungannon lead 1-4 to 1-1

Shea Mc Garrity misses a chance with his right foot to put his side ahead.

Clonoe’s Dwayne Quinn hits Dungannon’s fourth score of the day as St Pats move three ahead after 14 minutes but Colmans respond with a goal from Mooney and the game is level Dungannon 0-4, Colmans 1-1 fifteen minutes gone

Conor Gough has a chance for goal but the ball sails narrowly wide for St. Colmans

Kiefer Morgan shows composure and punches a chance over the bar. Dungannon move two ahead with 11 minutes gone.

Liam Gervin shows real class again and puts Dungannon ahead for the first time 0-2 to 0-1 with ten minutes played.

Gervin brilliant on the run and his shot comes back off the post, almost a goal from Gervin.

A short free from Gervin is returned to the Derrylaughan man and Dungannon level the game. 7 minutes gone and it is a point apiece.

A second wide for Gervin after a great run from Laverty but Colman’s looking very sharp.

Newry’s Jerome Johnston fires over the first score of the day. 0-1 to 0-0 Newry.

Liam Gervin misses a scorable free from distance in the first minute.

Dungannon Show one change from the selected team with Jason Carberry replacing Ryan Jones. Eglish club man Jones is away on  a humanitarian trip to Zambia.