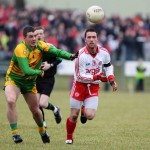 Tyrone will bid to go one better than twelve months ago and win the McKenna Cup title tonight at the Athletic Grounds in Armagh and at the same time gain some measure of revenge for that opening league defeat at the hands of Derry. Last weekend’s win over Sligo will have given the Red Hands a boost but according to attacker Martin Penrose they will have to be at their best to win.

“We knew though that if we worked hard for the full seventy minutes against Sligo we wouldn’t be far away and that’s what happened. Everybody was hurting going into the game after the way that we played against Donegal because we knew that we weren’t as bad as that.

The McKenna Cup is important to us and it’s a final and you like to play in finals. They will be out to prove a point as well after that heavy defeat last weekend at the hands of Laois and it should make for an interesting game and hopefully we will come out on top.”