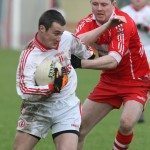 The Barrett Lighting Mc Kenna Cup Final which was postponed last Saturday night following the death of Patrick Harte has been refixed. It will now go ahead on Saturday March 5th in Armagh with a 7:00pm throw in time. Donegal man Jimmy White will be the man in charge as Tyrone and Derry do battle for the first silverware of the year. Through our website Teamtalk will bring live updates of all the action in the final as it happens. Tyrone manager Micky Harte will be hoping that the injuries picked up by Ronan Mc Nabb and Ciaran Girvan in the semi final against Cavan will have cleared up by that time. His selection choices will of course have been boosted by the return from suspension of Colm Cavanagh and the news that Owen Mulligan has recently returned from his travels to Australia.