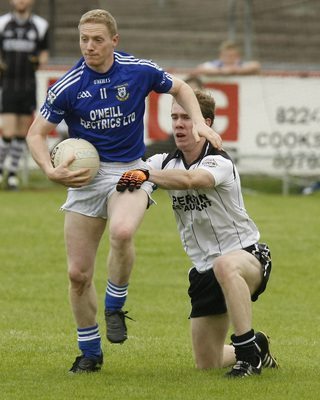 The County Champions of the last two years went head to head at Annagher tonight and the match ended in stalemate after a sublime Colm McCullagh free levelled the score deep into injury time.

Coalisland were fielding just two players in the forward line that started the county final but were 0-3 to 0-1 up inside fourteen minutes thanks to points from Eoghan Carberry, Jason Carberry and Gerard Toner.  Emmet O’Neill registered the Dromore score.  The Fianna men could have been further clear however a series of four wides helped keep Dromore in touch.

Dromore  got to grips with the game a little better in the second quarter and chalked up three scores in a row between the 16th and 26th minutes to take the lead thanks to  Niall Sludden, Sean O’Neill from 40 metres and a Colm McCullagh free.

Gerard Toner fired over a 20 metre free in the first minute of first half injury time to leave the sides all square at the break.  Coalisland 0-4 Dromore 0-4.

Paddy Montague thumped over a long range point to open St Dymphna’s scoring before county man Sean O’Neill swung over a free to open the gap to two.  Coalisland responded quickly and were back in the lead by the 40th minute via a Gerard Toner point followed by a point apiece for the McNeice brothers Paddy and Stephen.

Dromore looked slightly on the rack at this stage but they restored order thanks to two points from Colm McCullagh and another two points from the boot of Eoin McCusker.  Coalisland 0-7 Dromore 0-10.

With five minutes left on the clock Dromore looked home and dry but the plucky Coalisland men short of many of their regulars, including keeper Jonathan Curran, had other ideas.  Gerard Toner latched onto a loose ball in the 56th to drill low to the Dromore net and two minutes later they were ahead thanks to a Paddy McNeice point from close range.

Step forward Colm McCullagh.  Dromore surged up the right touch line to win a free on the Coalisland 20 metre line a yard from the touch line.  McCullagh thought about playing it in short but composed himself and floated over the equaliser from a very narrow angle with the last kick of the game.