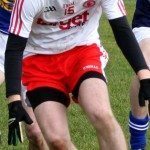 Even though the minor management have announced the panel of forty players for the Minor League they have reassured all other minor players within the county that there is still a chance to stake a claim for inclusion in the championship panel. Those who impress at club , school or college level will be given opportunities to impress and may still make the final thirty for the championship panel. Meanwhile details surrounding the minor league itself have been released and Tyrone find themselves in a group along with Antrim, Derry, Donegal and Fermanagh with their first game fixed for March 19th against Antrim.

Minor Football League (All games at 12.00 p.m, unless otherwise stated)

Group A: Ard Mhacha, An Cabhán, An Dún, Muineachan

Down v Monaghan at Pairc Esler

Down v Armagh at Pairc Esler

(Extra time to be played if required)