Home | More Than Points At Stake For Tyrone Ladies.

More Than Points At Stake For Tyrone Ladies. 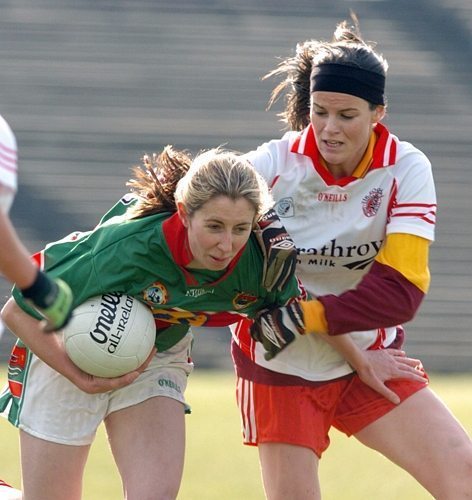 After a positive response last time out against Kildare Tyrone ladies will meet Mayo this Sunday in their penultimate Bord Gais national football league fixture and what a crunch tie it’s set to be. Relegation haunted Mayo have yet to gain a point and are rooted to the bottom while Tyrone sit level on points with Kildare, four points clear of this Sunday’s opponents.

Martina Dillon’s side beat the lilywhites with a steady improved performance last time out. Chistiane Hunter, Carol Dooher and Neamh Woods impressed in defence while up front Joline Donnelly found her form again with Gemma Begley and Catriona McGahan a constant threat. Tyrone must however build on that performance as they attempt to haul themselves clear of any relegation worries. A win against the division two bound Mayo would be enough to secure Tyrone’s place in the top tier once again ahead of a very difficult away trip to Cork and that is very much the target for Dillon.

Sinead McLaughlin should be available again although Eimear Teague and Eilish Gormley, both injured in the trip to Kildare, are doubts and captain Neamh Woods was in the wars last week in The O’Connor Cup. The Jordanstown captain, whose side were unfortunate to lose in the final against Shannon Quinn’s DCU, picked up neck and facial injuries and will have a fitness check ahead of Sunday’s encounter. Quinn was impressive, as she has been for Tyrone in the league, with her university side as they edged to a three point win. Tyrone were well represented in the final,  Neamh Woods, Laura McGillon, Roisin Rafferty, Christiane Hunter and Maria Donnelly featured for the beaten finalists while Quinn collected her third O’Connor Cup medal.

Uni rivalries will be left behind this weekend though as the focus returns to Tyrone and their battle in a very competitive first division. The Red Hands endured a shaky start to their league campaign but the changes a fortnight ago certainly made a difference and manager Dillon will have seen the green shoots of revival firmly established with the championship campaign not far away now. League survival is the target first and foremost though and full points will be the only thing on the minds of Dillon and her selectors.

Tyrone meanwhile will unveil their new sponsorship deal with a major international company on Friday evening at Beragh. All clubs must be represented at the launch which gets underway at 7-30, the formalities will be followed by a light supper. 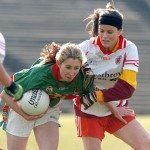