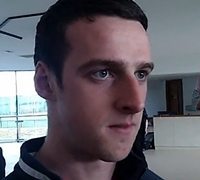 Tyrone have been dealt a blow ahead of their National League division two final with Cavan on Sunday week with the news that keeper Niall Morgan has been ruled out through injury.

Morgan broke a bone in his hand while playing for his club Edendork in the opening round of league fixtures in the County at the weekend. He plays out the field for the St.Malachys and actually top scored with seven points despite sustaining the injury early on as they won away to Strabane.

After the game he had an x-ray at Omagh Hospital where the break was confirmed and it is believed that he could have his hand in a plaster cast for up to six weeks. Manager Mickey Harte has rotated keepers Morgan and Mickey O’Neill throughout 2016 and Niall was set to feature in the league decider.

Morgan’s Edendork and Tyrone team mate Darren McCurry had to pull up at County training on Thursday night with an ankle injury but despite missing his club’s game at the weekend his injury is now believed to be not as bad as first feared.