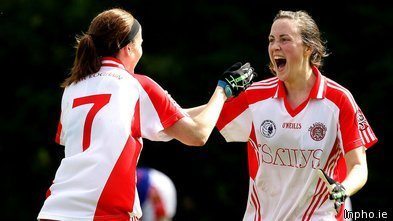 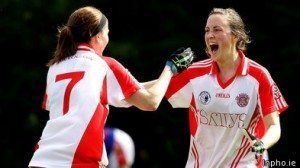 Aghaloo was the venue for tonight’s Junior Championship Preliminary game. Drumagh never looked like they could win this match although they battled gamely throughout. Great performances on the night from Moy overall as a team, but especially in the forward line, Sophie Lavery, Eimear McCormack and Eimear Swail were constantly on the attack and were well supported by Patricia Conroy in midfield and Colleen McCance in the defence. There were 2 penalties in the game, with Patricia Conroy taking both for Moy. The first one was slotted over the bar for a point, but the second one, which was taken in the dying seconds of the game ended up in the back of the net for a goal. Drumragh never gave up, with Joanne Barret working hard in defence, Sinead McLaughlin, Leah Quinn and Oonagh McMackin making their presence felt in the midfield area. They were given a glimmer of hope through substitute Clodagh Loughran who scored 2 points at the beginning of the second half but it just wasn’t their night. Moy now play Fintona in the Junior Quarter Final next weekend, venue and time to be confirmed.