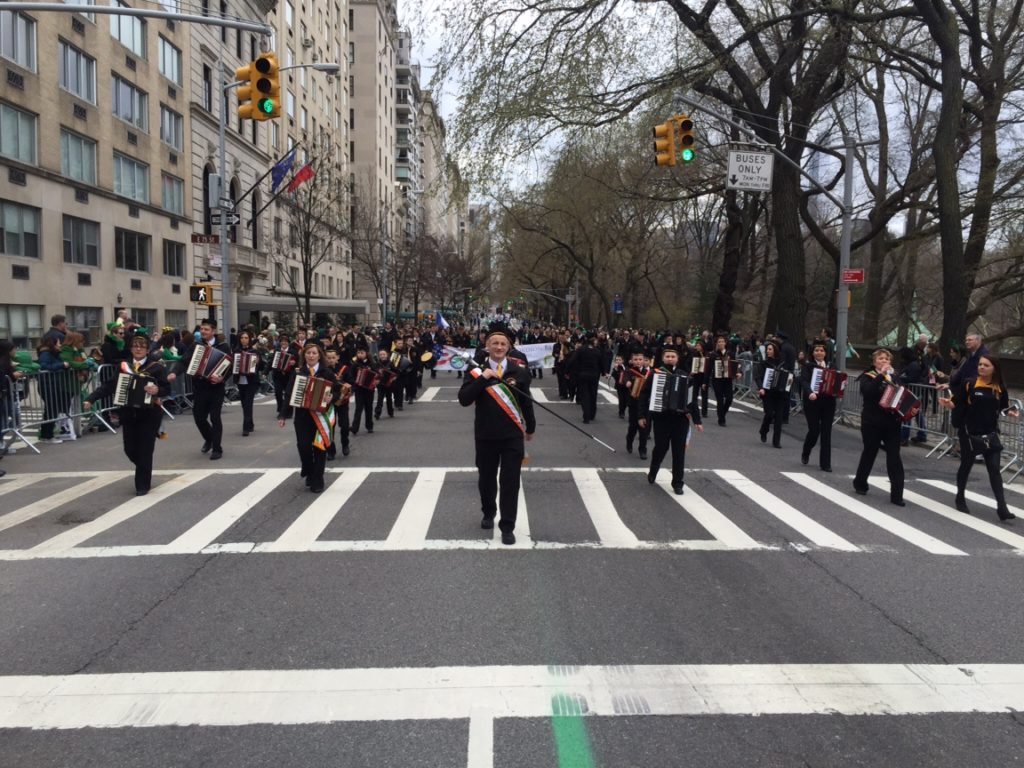 Last weekend saw Loughmacrory Accordion Band proudly march along the streets and avenues of New York City in the annual St. Patrick’s Day Parade. Several of them also performed in the Beer Authority Pub in Manhattan which is owned by proud Tyrone man Eamon Donnelly. The weekend was rounded off for the band when they performed at the County Tyrone Association 126th Anniversary Dinner. Loughmacrory native and President of Toronto County Board travelled down from Canada for the celebrations and sent us the following report.

“It was a sparkling March 17 in New York City for the annual St. Patrick’s Day celebrations. One of the largest crowds in memory lined the sidewalks as hundreds of thousands marched up Fifth Avenue bedecked in various shades of green but all enjoying the occasion.

In what seems a fitting selection, George Mitchell the former Senate majority leader who presided over the negotiations that led to the Good Friday Agreement and power sharing in the north of Ireland, served as the parade’s grand marshal. 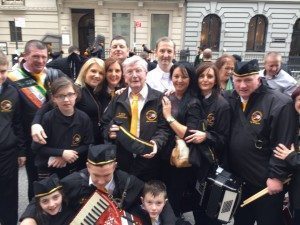 Also participating in the historic event was the Loughmacrory Accordion Band supported by dozens of family members. The entire Loughmacrory contingent were guests of the County Tyrone Association New York and judging by the broad smiles all were enjoying the sights and sound of The Big Apple. There was no doubt that this particular parade was certainly the biggest that the band had taken part in since its inception.

Of course while the parade was a special occasion and one that will linger long in the memory of the entire travelling group, it was not the only booking/engagement/event that the band performed at. The Saturday night following the Patrick’s Day parade saw the 126th Anniversary Dinner of the County Tyrone Association.  700 people attended the function which honoured Thomas Clarke, Joseph McGarrity and Alice Milligan, with guests of honour Pomeroy brothers Emmett, Sean and Noel Woods. Entertainment on the night was supplied by Whistling Donkeys from Dromore with guest appearances by the Loughmacrory band and former Tyrone and All Ireland winning footballer Ardboe’s Mickey Coleman. 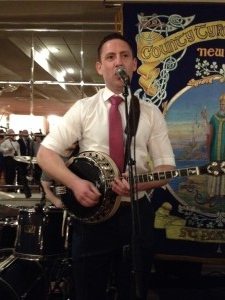 The group left New York Sunday afternoon, tired but with some unforgettable memories, feeling blessed to have experienced the best New York City had to offer.

A special word of thanks to Fintona’s Owen Rodgers and the members of the Tyrone Association in New York for hosting the band and family members, and helping with the logistics of the trip.”