Home | No Need For Alarm Bells Just Yet!

No Need For Alarm Bells Just Yet!


Two defeats in two games must be a source of concern to the Tyrone management as they sit pointless at the bottom of Division Two. Against Derry they lost narrowly and it could be argued they could have taken something from that game. However, against Donegal apart from the opening twenty minutes they were out fought and out thought all over the pitch.

Statistics can often be quoted to back up any case or point but on Saturday night the statistics made grim reading for all those involved with the Tyrone team. A point in the seventeenth minute of the first half was their last score from play and scoring only one point in the second half just about summed up the depth of the performance. More worryingly still was the fact that as a team Tyrone failed to create any real scoring chances of note through the entire second half. It was a very tame and toothless display by Tyrone but credit must be given to Jimmy Mc Guinness and his players for the approach they brought to the game. They were fitter, sharper, hungrier and more committed all over the field and in Michael Murphy and Colm Mc Fadden they had the two most potent forwards on the field.

New manager syndrome was very evident in their performance but there was much more to it than just that. Mc Guiness’s team had an intensity about their play that I have not seen from a Donegal side in almost twenty years. They were very well organised and had a plan which they stuck to throughout. In contrast Tyrone only played in fits and starts and in far too many cases they had individuals taking on Donegal on their own and inevitably they were overwhelmed by the intensity of the Tir Conaill men’s approach.

One defeat, or poor performance, does not make you a bad team but with Sligo away next and Kildare coming after that this year’s league could well mirror what happened last year. There is no need for alarm bells just yet but a third defeat in a row could see Tyrone in serious danger of relegation to Division 3. Unthinkable perhaps but a similar display to Saturday night’s and the unthinkable could well become a reality. 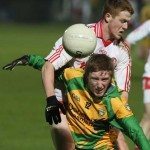