Home | Not A Bad Weekend For Kildress!

Not A Bad Weekend For Kildress!


Members and supporters of Kildress Wolfe Tones had plenty to smile about last weekend following their narrow victory over Aghyaran in Gortin on Sunday. That win rounded off sweetly what was a very important few days in the life of the club following the offical opening of their new facilities.

The Kildress club hosted a very successful event last Friday night when a large crowd turned up to witness the switching on of the floodlights at the new pitches at Gortacladdy. Club Chairman Seamus Loughran welcomed everyone and thanked all the local people for the great support they had given the club. He paid a special tribute to all the members of Cairde Cilldreasa, the Sponsors and all who supported the various club fund raising ventures. Ulster Council President Aoghan O’Farrell who was the guest speaker praised the new facilities and also paid tribute to the funding bodies that helped to finance the cost. Danny O’Connor speaking on behalf of the Sport NI said that they were committed to providing a wide range of facilities for the benefit of communities throughout Northern Ireland. He stated was very impressed with the facilities provided at Kildress and hoped they would bring great enjoyment to the people of the area.   Fr Paddy Hughes PP blessed the new facilities and Tyrone County Chairman Ciaran McLaughlin then declared them officially open. Matt Tracey Club Development Officer thanked everyone for their contributions and paid tribute to the main contractors Fox Contracts for the excellent job they had done. He also thanked members of Cookstown District Council, Sean Clarke ,James McGarvey and Tony Quinn for attending and acknowledged the contribution the council had made to the new entrance. Cloughfin Pipe band entertained the crowd with music as they waited for the football match to start. The team from the Ulster Council including Diarmuid Marsden, Stephen Donnelly, Kevin Kelly and Catriona McGahan representing ladies football. Kildress Select had a number of past players including Kieran McHugh, Aidan O’Connor, Sean Tracey, Jason Mulgrew and player manager Frankie Corey. A number of players from local clubs made guest appearances and among those were Ryan Pickering (Cookstown), Aidan Girvan (Rock), Hugh Pat McGeary (Pomeroy) Kevin McNally (Carrickmore), Eoghan Devlin (Greencastle), Paul Devlin (Moortown) and Kevin McCullagh (Gortin).  The game was very entertaining and played in a great spirit and when referee Sean Heagney called time it was the Ulster Council who led on the score of 2-12 to 2-9. 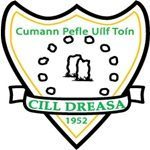 The evening concluded with refreshments being served in the clubrooms