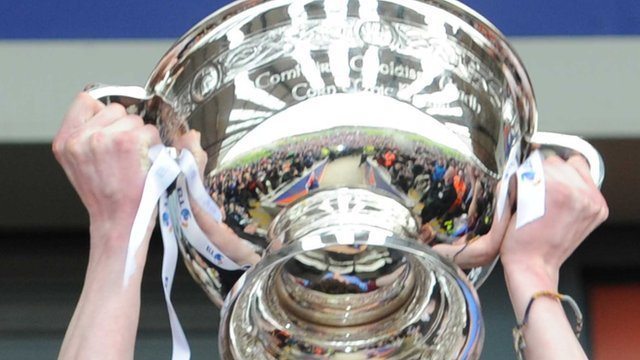 Omagh CBS made the perfect start to their Mac Rory Cup campaign with a very convincing 5-7 to 0-5 win over neighbours St Michaels Enniskillen on Thursday afternoon.

Following a cagey opening by both teams, it was St. Michael’s who applied the early pressure which was rewarded with Diarmuid King opening the scoring from a ’45m kick. This was cancelled out by a Conor Owens free for Omagh. The game remained tight with both teams taking time to settle.

Two frees for Omagh from Owens & McGillion eased the CBS lads in front while a slightly profligate St. Michael’s failed to register despite creating a number of good chances.

With the first water break just over Omagh delivered a hammer blow when Dara Hayes raced through to hit a pile-driver to the top left hand corner. If this score came as a shock to Dom Corrigan’s lads, then they were stunned when two more goals hit the back of Ross Bogue’s net, both from the boot of Conor McGillion. McGillion then added a fine point from play before Diarmuid King stemmed the tide with 2pts from the dead ball. However Omagh Patrick McCann replied with another major to leave the HT score 4-04 to 0-03.

The 2nd half saw Eoin McElholm score a point from play for Omagh before St. Michael’s midfielder, Justy McDade  replied with a fine long range effort. Omagh kept the pressure on though and points were scorrd from McCann & Owens before goal number 5 arrived courtesy of McCann again. Conor O’Hanlon scored a consolation point for St. Michael’s who now must beat St. Pat’s Cavan on Saturday 4th Dec in Killygarry to remain in this year’s MacRory Cup. FT score: 5-07 v 0-