Omagh Make It Through By A Point In Under 21 Tournament 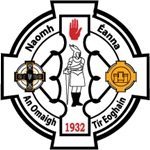 Omagh St Endas have managed to turn round an early three point deficit in the opening thirty minutes to reach half time leading 1-06 to 0-03. Mark Treanor and Paul Sherlock gave Scotstown the perfect start with the opening three points but a free from county player Ronan O’Neill steadied Omagh and once they found their feet they took control. Further points from Aaron Grugan (0-2), Shane O’Neill and Conan Grugan (0-2) plus a Chrissy Gallagher Goal have put the Tyrone Champions into a very commanding lead at the short whistle.

The second half saw a huge revival from the Monaghan side and an early goal gave them just the kind of start they needed. They managed to draw level with eight minutes left on the clock but the Omagh side dug deep and with solid performances from Darren Bradley, Chrissy Gallagher, Ciaran Mc Laughlin and Kieran Hughes plus a man of the match display from Conan Grugan St Endas progressed to the semi final by the narrowest of margins on a score line of 1-12 to 2-08. They will now face Armagh champions Cullyhanna in the last four following this afternoon’s draw.