Omagh CBS have been dealt a blow ahead of their eagerly awaited MacRory Cup derby clash with St.Patricks Academy Dungannon on Monday night with the news that star attacker Ronan O’Neill is almost certain to miss the game. The Omagh St.Endas clubman injured his ankle when landing awkwardly in the closing stages of the first half of the minor league final against Dromore on Saturday. The centre half forward had scored three points for his side at that stage but didn’t reappear for the second half. 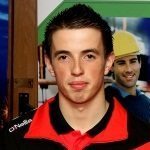 His absence could well tip the balance in favour of Dungannon in a meeting between two unbeaten sides in their group with the winners odds on favourites to make it through to the McCormack Cup final at the start of next month. No doubt the injury will also be a concern to his club with the opening game in defence of their Ulster minor title down for decision on November 28th. Omagh St. Endas are due to face Lamh Dearg of Antrim in the preliminary round of the St. Paul’s tournament with the winners of that game scheduled to meet Fermanagh champions Aghadrumsee in the quarter final.