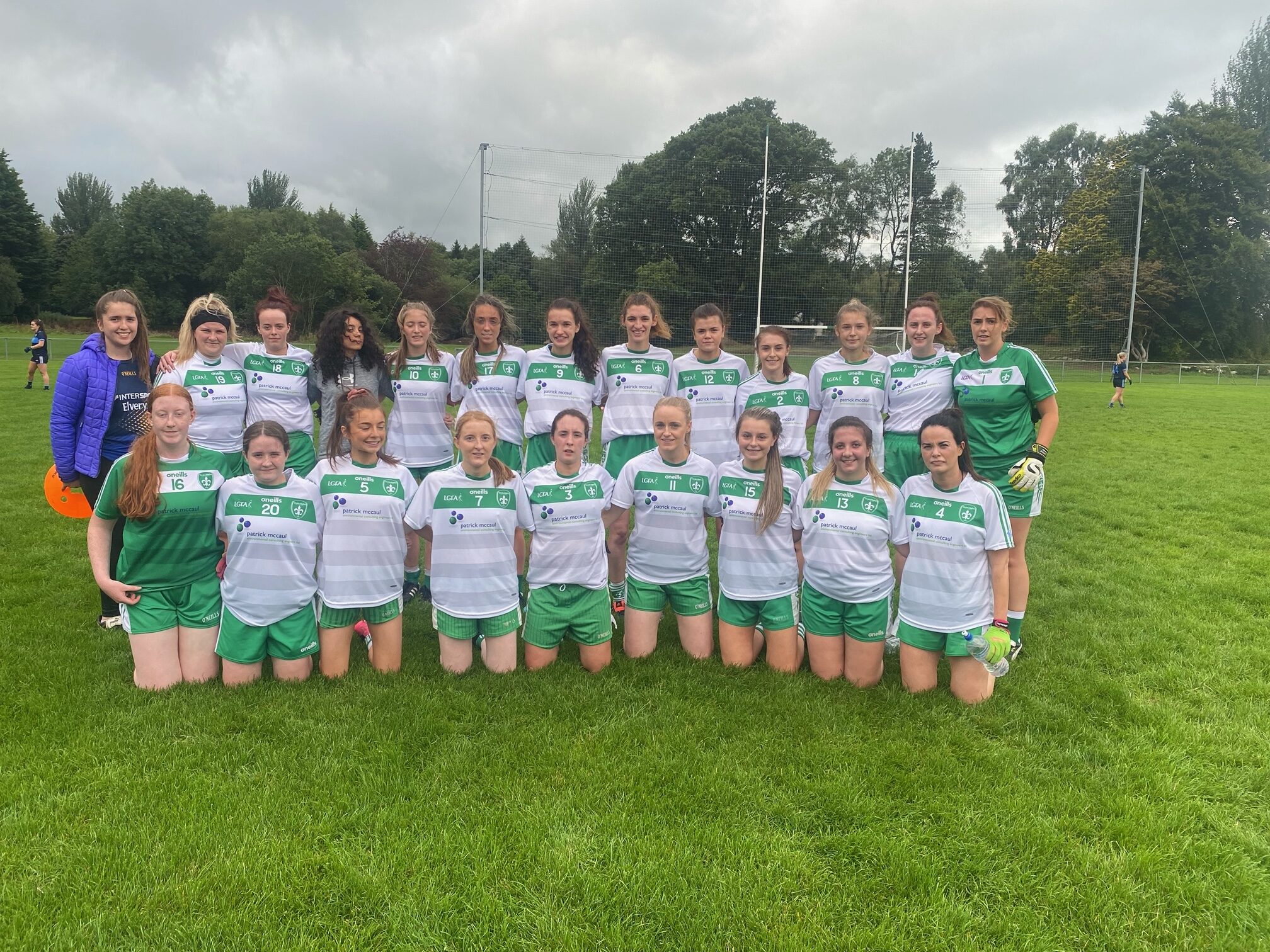 High-flying Fintona, with four wins from their first five games, were the visitors to Páirc Thír na nÓg on Saturday evening past for the latest round of fixtures in the senior ladies intermediate league.

In contrast to their opponents, the Moy girls came in to this match on the back of some disappointing results. However, that was all about to change as the Tír na nÓgs bounced back to produce their best performance of the season so far.

An Mhaigh got off to a great start, racing into a 1-3 to 0-0 lead with Lucy Conroy finding the net for her team. Nina Murphy, Cara Corr and Caoimhe Magee all kicked points before Fintona came back to quickly register 1-1.

The sky blues continued to push on and were further boosted when goalkeeper Ciara O’Hanlon made a fine save to see out the first half. Half-Time Score: An Mhaigh 1-8  Fintona 1-1.

The home side continued its impressive form in the second half with excellent defensive work from the back-line. Caoimhe Magee in the middle of the park was also driving forward at every opportunity to help keep her team on top.

Late in the second half, Emer Currie was introduced to the Moy attack and she made an immediate impact, scoring a goal and a point to secure a terrific win.

This was a great all-round team performance from An Mhaigh who will now look forward to maintaining this form when they hit the road next Saturday evening to take on Drumragh away in the league.

Trillick defeated Edendork 4-21 to 2-12. Edendork made the perfect start to the game with a Maeve Maxwell goal straight from the throw in but Trillick responded immediately with a goal of their own from Cathleen Kelly. Fiona Owens hit seven points for Trillick while Shauna Mc Gurren (2-0), May Williamson (1-3) and Dearbhaile Gallagher (0-5) were also among the scores for the Reds.

Cappagh and Drumragh played out a high scoring draw with the game finishing Drumragh 3-11 Cappagh 2-14. Cappagh appeared well placed at the break leading 2-7 to 0-8 but three second half goals from the home side tied the game.Teri Mc Cusker top scored for Cappagh while Caitlin Kelly was excellent from placed balls.

Alannah and Ciara Donnelly were impressive and among the scores for Killeeshil in their game with Carrickmore but that was not sufficient to deny Carmen the win. Veteran Claire Mc Gurk and Clodagh Munroe bagged goals for their side while Eve Loughran, Sorcha Gormley, Caitlin Gormley, Gemma Begley and Meabh Mc Elroy were among the points. Dearbhla Donaghy was superb in goals for Carrickmore while Aiden Loughran and Eimear Mc Garrity stood out in defence.

Clonoe continued their winning ways in the Patrick Fahy & Co. Solicitors Senior League when they travelled to Strabane and defeated the sigersons. Once again scoring machine Orla Gavin was in fine form hitting 4-7 of her team’s total. Niamh Donaghy also hit the net for the winners while Naomi Donnelly 0-02 and

Clonoe registered the first score of the game through a Naomi Donnelly point. Strabane responded with two points before Naomi Donnelly scored another point for Clonoe. Orlagh Gavin scored her first point of the game by scoring a close range free before Niamh Donaghy scored the first goal of the game to leave Clonoe leading by 4. Strabane responded with another two points before the water break. After the water break Strabane started strong adding another point, cutting the deficit to 1 point. However, Clonoe dug deep and registered another 2 points through fine shooting by Orlagh Gavin. The Clonoe defence came under sustained pressure with goalkeeper Alicia Coyle having to pull off a fine save to prevent a Strabane goal. However, they did register the next point through a close range free.  Clonoe responded with 1-02 scored by Orlagh Gavin to Strabane’s 1 goal to leave Clonoe 4 up at half time.

In the second half, it was Strabane who began well registering the first 3 points of the second half to close the gap to 1. However, Clonoe showed resilience and tenacity when they responded with 2-01 scored by Orlagh Gavin before the water break. With an 8 point lead and with 15 minutes to go, Sinead Hanna added another point for Clonoe. Strabane continued to put pressure on Clonoe and were denied another goal after another fantastic block by the Clonoe goalkeeper Alicia Coyle. At the other end, Briana Quinn was pulled down when heading for goal with Orlagh Gavin converting the penalty. Strabane continued to press and managed to get a goal for all their efforts. However, it was Clonoe who registered the last score of the game, a point by Orlagh Gavin to claim the win.

Macartans got back to winning ways as they put Donaghmore to the sword before winning 4-20 to 1-2. Marie Treanor, Colleen Mc Quaid, Rhiannon Monaghan, Tara O’Hagan, Maura Mc Menamin, Michaela Woods and Paula Donnelly hit first half points while Mc Menamin and Donnelly shared three goals between them. Donnelly completed her hat trick after the break while Shauna Mc Girr, Aine Arkinson and Elisa Woods also got their names on the score board.