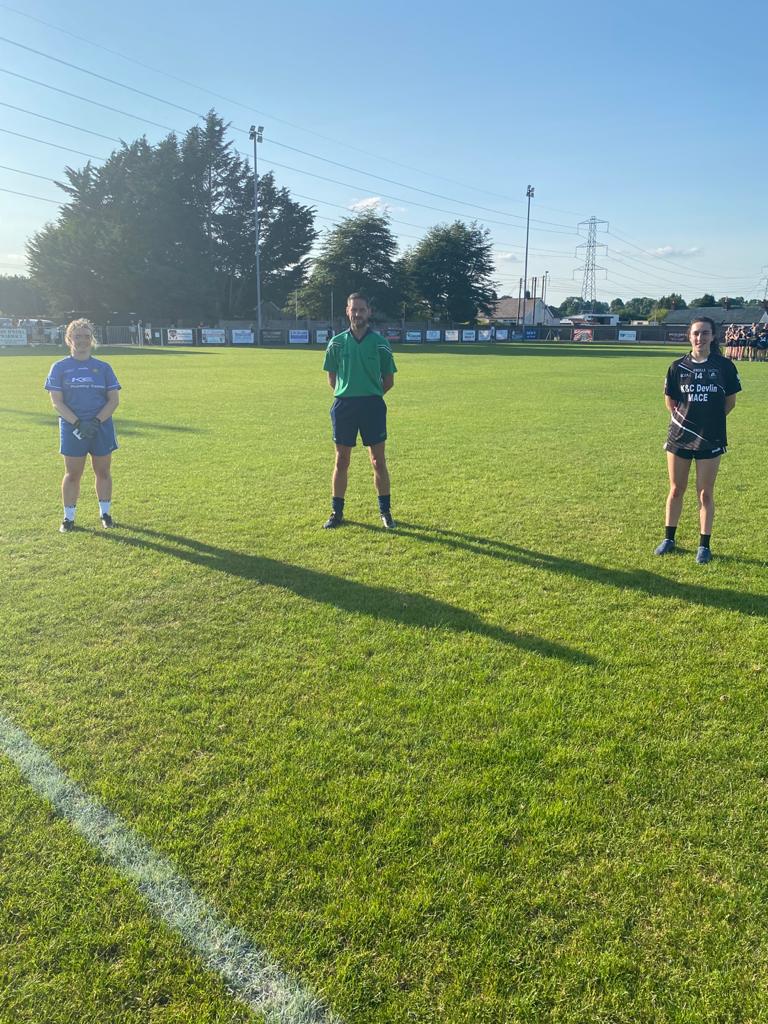 Sperrin Og enjoyed a fine win over Donaghmore with excellent displays from Aisling Fox in defence, Carla McCann in midfield and Shauneen Ferrity and Eadaoin Fox up front. Once again Niamh O’Neill proved her worth to the team with a superb scoring display showing unerring accuracy from frees.

Trillick continued their fine run of form with another good win this time against a talented Moy side. First half goals from May Williamson (1-1) and Dearbhaile Gallagher (1-1) helped the Reds reach the break leading 2-5 to 0-2. Moy improved after the break but Trillick were not to be denied and cruised to a 3–10 to 1-5 win. Other scorers for the Reds were Shauna mc Gurren – 1.0, Fiona Owens -3pts,

Drumragh entertained Castlederg and in a high scoring game emerged winners on a score line of Drumragh 6-14 Castlederg 2-18. Both sides deserve great credit for the quality of the football served up and the sporting manner of the match. The Sarsfields led  4-12 to 1-10 at the break and maintained their dominance right to the end.

Kildress Ladies recovered from a rocky first half to turn this game round in the third-quarter and eventually ran out deserving 1-14 to 1-8 winners over a strong and fast-moving Strabane team on a perfect evening at Gortacladdy on Saturday evening.

Driven on by Tyrone Captain Tori McLaughlin, The Sigersons tested Kildress to the full in that opening half and reached the break a deserved goal in front. A reorganised Kildress however really came to terms with things on the restart and Caoimhe Gilmore’s acute angled goal finish gave them a grip on the game that they never relinquished, Chloe Tracey continually picking off points and ending up with a match tally of 0-11.

Clonoe senior ladies welcomed neighbours Coalisland Fianna to Páirc Uí Rathaille on Saturday. On what was a blistering hot day, both clubs put on a very entertaining and enjoyable game of football.

Coalisland were quick to start and by the first water break had established a 1-3 to 0-0 lead and continued this after the restart. It took until half way through the first half before Clonoe got into the game registering their first score through Sinead Hanna with a fine point. By the second water break in the first half it was 2-06 to 0-3. Sinead Hanna got a goal shortly after the restart to Coalisland’s 2 points during this interval closing the gap to 8 points.

In a game of two halves, it was Clonoe who found another gear in the second half. By the first water break they had reduced the Coalisland lead to 4 points with a goal and point from Orlagh Gavin and a point from Aoife Coyle. In the middle interval another four points were kicked to Coalisland’s two, bringing the deficit to 2 points entering the last ten minutes. Shortly after the restart, following the last water break, Clonoe were awarded a penalty after a foul on Sinead Hanna. Orlagh Gavin scored the spot kick to give the Clonoe girls a one point lead. Coalisland however dug deep and drew level before Clonoe took the lead again through a point from Maeve MacOscar. However it was Coalisland who emerged victorious as they scored the last 3 points to win by two points.