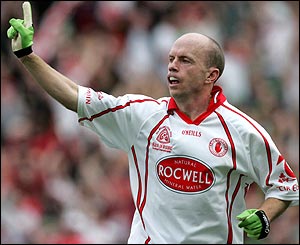 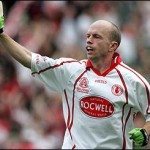 Holy Trinity may not have been at their fluent best at Celtic Park on Monday in the Markey Cup final but they turned things around in the second half to run out four point winners in the end against Rosses Community School and Peter Canavan was a happy man at the final whistle.

“Its eight years since we won it, I didn’t realise it was that long, it seems like yesterday. The Rosses really put it up to us and at half time they went in a point up and they were dominating in around the middle sector but once we got to grips with that in the second half we got a better supply of ball into our forwards and I felt that they caused their defence damage every time they got the ball.”

After a hugely impressive semi final win over St.Ciaran’s Ballygawley they were sluggish at times in the decider especially in the first half and Peter felt that the fact that most of the players had a game twenty four hours earlier didn’t help their cause.

“I don’t think it was a worry of getting them back down to earth or getting them motivated for the final of the Markey Cup, part of the reason for the flat performance may have been the fact that most of these boys had to play a minor league game for their clubs the day before which was disappointing.

It was an Ulster final; these boys are two games away from Croke Park and they were nearly caught today and it took every ounce of energy to get them over the line.  We were disappointed that they were put in a position where they had to play two important games in consecutive days and that’s why we had a sluggish start. There is a short turnaround now for the All Ireland semi final which is this Saturday but it’s a problem that we are delighted to have and are now only sixty minutes away from Croke Park.”