Home | Ricey To Travel With The All Stars.

Ricey To Travel With The All Stars.


Dromore and Tyrone veteran defender Ryan Mc Menamin has been selected to join his county team mates Joe and Justin Mc Mahon on the up coming All Star trip to Kuala Lumpur. The trio will jet out with the rest of the All star entourage on the twenty fourth of this month. Philip Jordan was the only Tyrone player to make it onto this year’s All Star fifteen but the popular Moy man will not be making the trip to Asia. Ricey had been scheduled to act as a judge at next weekend’s Strictly Come Dancing function in Aghyaran but will be dusting down his passport instead and jetting off to the warmth of Kuala Lumpur. It is a hard job but someone has to do it!!!!!! Hopefully the three lads will enjoy the experience and recharge the batteries for next season. 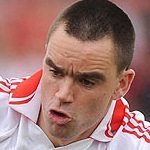