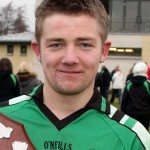 It finished 3-13 to 1-18 after extra time, with the two teams deserving tremendous credit for the spirit and skill served up in front of a sizeable crowd in Beragh.

Augher will look back and think about being seven points up with 17 minutes remaining in normal time and again when three points ahead halfway through extra time.

On each occasion, however,  at St Mary’s Park Rock responded to the cause admirably and they also went a man down in normal and extra time segments.

It had finished after normal time 1-13 to 1-13, Frank McElroy getting the Augher goal and Jamie Donnelly chalking up a string of St Macartan points plus Declan Connolly and Ruari Cassidy also among the contributors.

Martin Ward, major, Conor McCreesh and Aidan McGarrity led the Rock charge in normal time to draw all-square before Augher built up a three-point lead at the end of the first extra time period.

The St Macartan’s were caught by two quickfire goals that gave the St Patrick’s the advantage in the last period, Colm McWilliams and Aidan Gervin between them touching home and a defensive mistake then let through a Conor McCreesh centre.

Donnelly pulled a couple of points back for Augher but they could not force a replay as Rock St Patrick’s lifted the trophy.