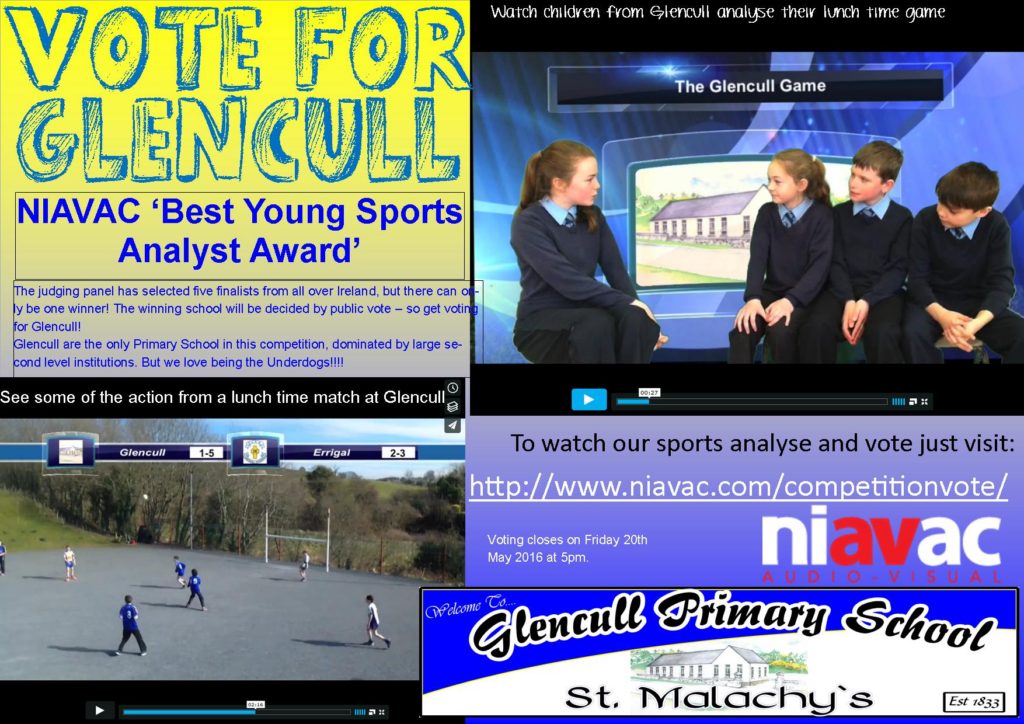 St Malachy’s Primary School, Glencull, are in with a chance of being voted Niavac’s ‘Best Young Sports Analysts’. The football mad children at Glencull took on the challenge set down by Niavac (Ireland’s premier audio visual design, installation and maintenance specialists) and Peter Canavan.

In January Niavac, in association with sporting superstar and Sky Sports pundit, Peter Canavan, sent out a nationwide call to all primary and secondary school pupils across Ireland to take part in a competition to win a state-of-the-art 70” Clevertouch interactive touchscreen for one of their school classrooms. The children were set the challenge of producing a short video analysing a sporting event.  Pupils had to brush up on their sporting analysis skills and video production knowledge to submit their entry for the competition.

Ellen, P7 from Glencull, explained, “We discussed in class what sporting event we were going to try to analyse. We watched videos Peter Canavan had place on the Niavac website that gave advice on how to analyse a match.”

Tiernan from P7 continued, “We play a game twice a day, at break and lunch time. We pick teams at the start of the week, and we have a different referee every day. We call the teams after the two teams we really want to play for the most; Glencull school team and Errigal Ciaran! We thought; if we analyse one of these matches we’ll be able to improve”

So the children at Glencull set about making a video of one of their lunch time matches and they analysed it to see how they might improve. Their video was selected by a judging panel of top sports analysts as one of only five finalists from all over Ireland.

It’s now down to a public vote to see who will be crowned Niavac’s ‘Best Young Sports Analysts’.

Glencull would surely have to be called the underdogs in this public vote as they are the only primary school in the competition. The other schools; Marlin College, Co. Galway, Friends’ School Lisburn, Co. Antrim, St Louis Grammar School, Ballymena, Co.Antrim and St. Dominics Grammar, Belfast, Co.Antrim, are all 1000 strong second level institutions, giving them much greater voting power.

This has led the children at Glencull to starting a social media campaign to canvass for votes! Their amazing vote is now going viral with SportJoe.ie picking up on their great analysis with an article entitled; “These Junior GAA analysts are our new heroes”. Joe.ie has over 250 thousand followers on social media and the Glencull video is now ‘going viral’. The Dublin based sports writing team at sprotjoe.ie picked up on the great language used by the Glencull child in their self penned script, and they highlighted phrases like, “He doesn’t need to go to Ballygawley roundabout to turn” that the children used. The Dublin journalists also thought the children from Glencull were, “so-good-they-make-joe-brolly-and-pat-spillane-look-like-preening-soundbite-merchants”.

Voting closes on Friday 20th May 2016 at 5pm, and as the Glencull’s entry is the only one from Tyrone in the final they are appealing for your vote to try to make them Niavac’s ‘Best Young Sports Analysts’. So why not watch their video and vote for them at http://www.niavac.com/competitionvote/