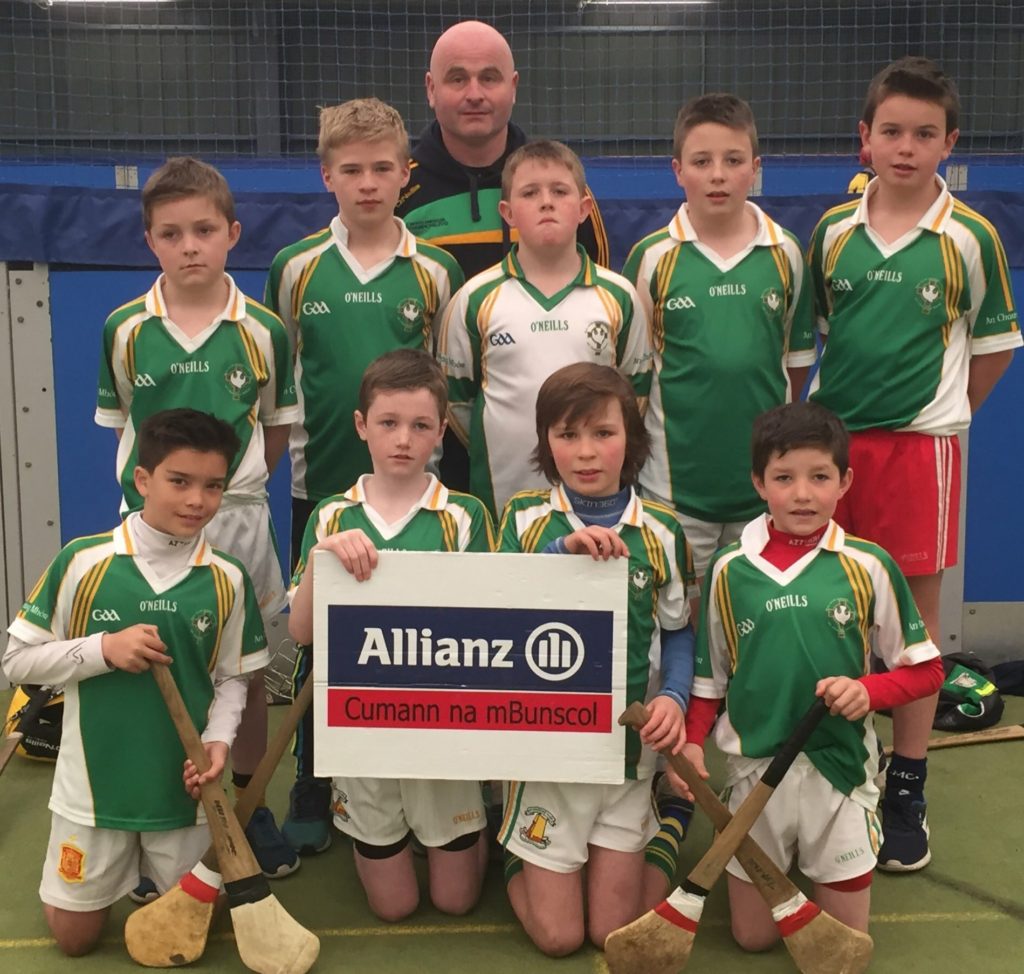 Allianz Cumann na mBunscol Uladh held their eagerly awaited Ulster Indoor Camogie & Hurling Finals in the magnificent Meadowbank Sports Arena, Magherafelt, Co. Derry. Schools from right across the province sent their respective county champions to do battle in an attempt to capture the coveted Ulster title in each respective code. Tyrone had two representatives going in as county champions: Eglish girls and Carrickmore boys. Hopes were high that these two talented teams could put up a good showing of their undoubted skills, and this is what they did.

The first competition saw the Camogie teams drawn into two sections – ‘A’ and ‘B’. St. Patrick’s P.S. Roan, Eglish (Tyrone champions) were pitted against the Antrim and Down champions: Creggan and Hilltown, respectively. The Eglish girls immediately found their stride when registering an impressive 3-1 victory against Hilltown. They then followed this up with an equally impressive triumph against the Antrim champions, Creggan – by also recording a resounding 3-1 win. These terrific results ensured that Eglish had secured a semi-final berth as section winners.

The other section contained the champions from Derry, Donegal, Armagh and Fermanagh. As things transpired, it was host county (Derry) who provided the semi-final opposition in the shape of Castledawson’s New Row P.S. However, despite giving absolutely everything, the skilful Eglish team – try as they may – just couldn’t a find a way past the heroic efforts of the Derry goalie. This being so, they narrowly bowed-out of the competition. Our county champions, though, can look back upon a brilliant season in the knowledge that their tremendous efforts saw them finish with a Tyrone championship and a third place finish in Ulster! This is testament to the wonderful efforts of teachers, parents, club and county coaches –  with thanks to Anne Daly Tyrone G.D.A. for the latter. Master McCreesh and Leona Gallagher certainly have a talented team on their hands – a team that will only grow stronger in the future…

The day’s second competition saw the Hurling teams also drawn into two sections – ‘A’ and ‘B’. St. Colmcille’s P.S. Carrickmore (Tyrone champions) were pitted against the Antrim and Down champions: Ballycastle and Ballygalget, respectively. The Carmen lads got off to the best possible start when registering a hard-earned 1-0 victory against Ballygalget. Their next match was a gripping affair against the Antrim champions, Ballycastle. Unfortunately, Carrickmore found themselves on the wrong end of a 5 goal thriller – going down narrowly 3-2. However, these results ensured that St. Colmcille’s had secured a semi-final berth as section runners-up.

Things didn’t get any easier as Carrickmore faced the other section’s winner: Slaughtneil’s Tirkane P.S. – a school that had thumped 7 goals in both of their group games. Despite the Carmen lads taking an early lead, the Derry boys hit back to score three of their own to win 3-1. Thus, the Carrickmore odyssey for 2016 had ended. However, huge credit to Master O’ Neill and his brave boys. They gave a great account of themselves and did their families, school, club and county proud by securing a county crown and a top 3 finish in Ulster. Maith sibh go léir!