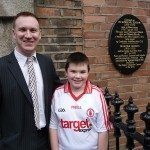 The Sigerson Cup is among the most prestigious Gaelic football tournaments in Ireland and winning it has always been the ambition of any university Gaelic Footballer. The competition is of course named after Dr George Sigerson as is the GAA club in Strabane. You would imagine that such an important figure in GAA history would be well researched and documented but as the Higher Education Council of the GAA recently discovered that was not the case.

Just before The Sigerson Cup Final took place the Council marked Sigerson’s contribution to the GAA and Irish life by unveiling a special plaque at his Dublin Home. The prominent role played by this very special Tyrone GAA man has now been marked for future generations in stone and in writing.