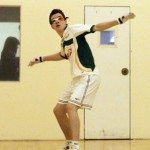 Further great news from The USA tonight as we hear that Carrickmore star Handballer Caolan Daly has just added the North American Under 19 Singles title to his growing list of honours. Caolan had been seeded number one for this tournament and lived up to his reputation with some outstanding play as he swept all before him en route to the final. Interestingly he faced fellow Irishman and great rival Stephen Cooney from Mayo in what was a re-run of the Irish Nationals final of a few weeks ago. That game went to a tie breaker as did this one but Caolan tonight showed great composure and no shortage of nerve to come from a set down as he dispatched his opponent 19-21, 21-17, 11-1 to be crowned North American National Junior 4 Wall Champion.

Unfortunately for Caolan  his hopes of Double success were ended when Cooney and his partner Cordova gained revenge in the Doubles final to deny Daly and Mc Elduff the chance of further success. It was disappointment too in the Under 19 Girls Doubles Final when Tyrone player Maeve Mc Elduff lost out in her quest for glory. That blow was softened somewhat when Pol Clarke and his Doubles partner Tyler Stoffel lifted the Under 15 title to earn further success for the Tyrone group. The handballers are due home in early January and are sure to receive a terrific welcome following their exploits in San Diego. 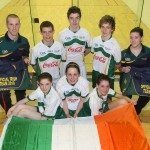