For Tyrone ex-pats living in and around Toronto there is an opportunity later on this evening to pay tribute to the late Michaela Mc Areavey. A special mass will be celebrated at 3:30pm local time in St. Paul’s Basilica Toronto to commemorate Michaela’s passing. Celebrant for mass will be Fr. Gerry Scott a former Roscommon county footballer and it is hoped there will be a large attendance of Gaels and emigrants. 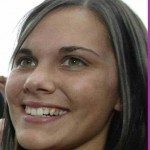