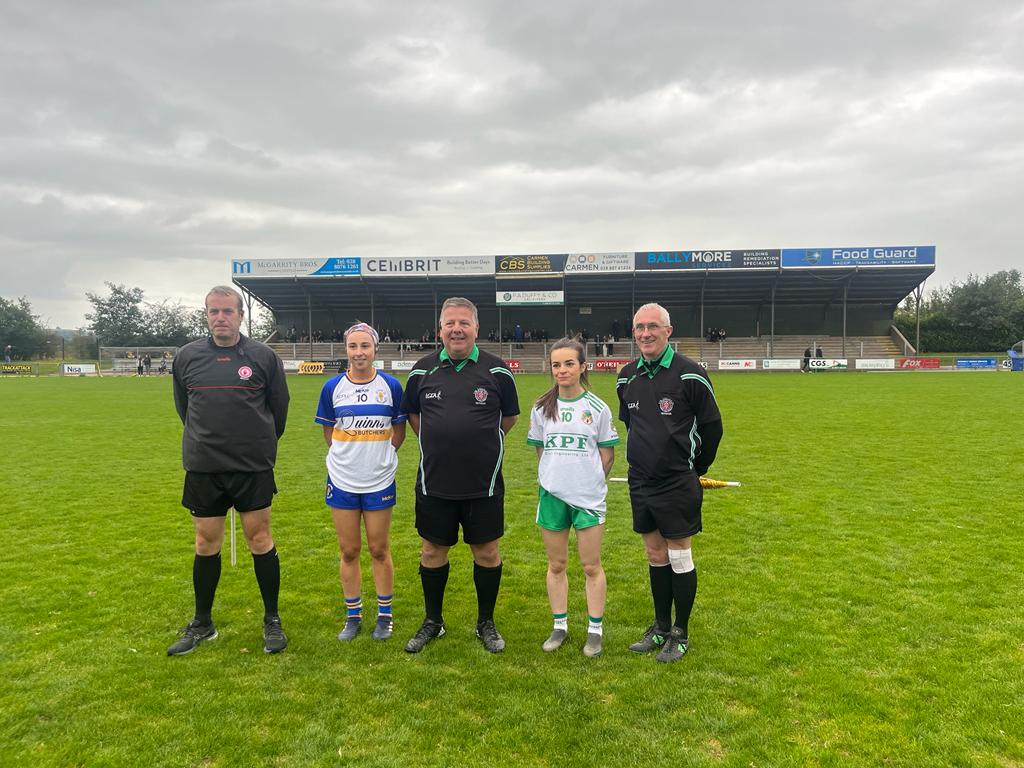 Sperrin Óg are through to the Murphy’s  Gloves senior championship final after a last minute goal from Shauneen Ferrity saw them defeat Errigal Ciaran in a real nail biter of a game.

There was little between the teams throughout and it came as no surprise that they were tied 1-7 apiece at the end of normal time.

Only two points separated them with the second period of extra time almost up when full forward Ferrity took a pass from Michaela Fox and fired her shot low and to the left of goalkeeper Grainne Mc Anenly.

This was a relatively low scoring contest but what it lacked in scores it more than made up for in intensity and endeavour from both sides.

Bronagh Mc Aleer hit the net with Errigal’s first attack as the Dunmoyle side began the game with real pace. With both defences working well scores were hard to come by. Niamh O’Neill landed Sperrin Óg’s first score on three minutes but six minutes later Errigal re-established the three point lead following a good score from Elle Mc Namee. Errigal were enjoying more of the ball and the intensity and ball carrying of Meabh Corrigan and Oonagh Mc Aleer was certainly asking question of the Sperrin Óg defence.

Both sides went point for point throughout the first half with Emile Loughran and Aoife Horisk on target for Errigal and Shauneen Ferrity, Aileen Tuohey and Niamh O’Neill on target for Sperrin Óg.

The pattern for the second half remained largely the same with quality defending the order of the day. Two points apiece and a penalty goal was scant reward for the efforts of the thirty plus players used but that is what is sometimes required to make it to a championship final.

As the game entered injury time there was still a point between them with Sperrin Óg leading. Errigal attacked from deep and once again Aoife Horisk delivered the goods with a fine finish to level it at 1-7 apiece and take it to extra time.

The pace remained relentless but scores were at a premium during extra time. Errigal pushed ahead with a brace of points from the outstanding Aoife Horisk and with time running out it looked like the Dunmoyle girls would take the victory. Sperrin Óg refused to panic however and prompted by the outstanding Eadoin Fox and Carla Mc Cann the ball made its way to Michaela Fox. Her pass reached Shauneen Ferrity who somehow managed to hammer her shot low and hard to the net through a crowd of players and take Sperrin Óg through to the final on a score of 2-8 to 1-10.