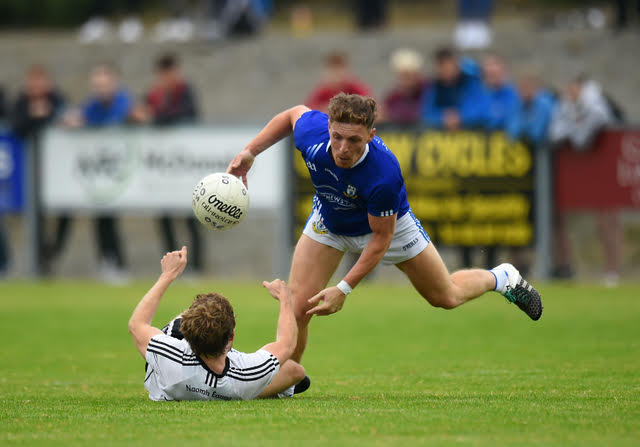 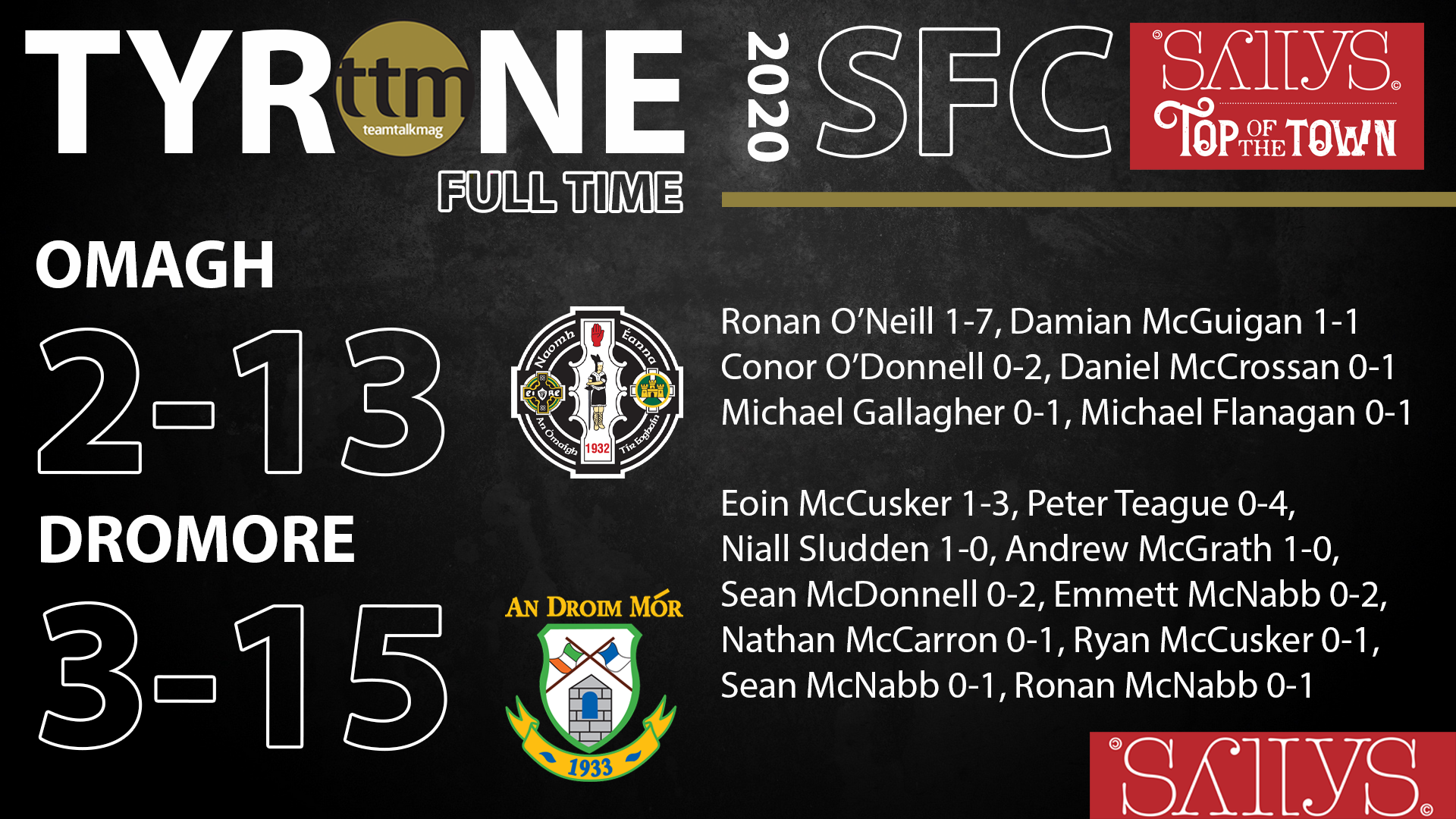 When the draw was made for the LCC Tyrone senior championship this was one of the ties that immediately caught the eye and the two sides certainly didn’t disappoint at Loughmacrory as they served up a thriller with Dromore eventually prevailing after extra time.

It was a high quality spectacle throughout and ironically there was more scored during the two extra period than there was at the end of the sixty minutes with the sides locked together on 1-8 each. Dromore will take great heart from their display in a contest that ebbed one way and then the other as they set up a mouth-watering quarter final date with Errigal Ciaran.

Dromore full back Peter Teague, who was superb throughout, opened the scoring with a fine effort from forty metres but it was Omagh who made all the early running. Ronan O’Neill kicked a brilliant free into the wind and he followed that up with an excellent effort from play before Conor Meyler and O’Neill combined for left half back Damian McGuigan to drill the ball low to the net in the 8th minute. Dromore were in early trouble but five minutes they were right back in the game when Niall Sludden and Ryan McCusker were involved in a move that saw team Captain Eoin McCusker first time the ball low to the net past keeper Niall McGinn.

McCusker followed that up with a point from play before a free conversion in the 19th minute from the same player had the winners in front. Just before halftime Omagh keeper McGinn made a great save to deny Declan McNulty a goal with Emmett McNabb knocking over the resulting 45 for a 1-4 to 1-2 interval advantage.

McGuigan opened the second half scoring within sixty seconds of the restart and Omagh were level by the 35th minute with O’Neill on target from a placed ball after taking an excellent mark. A flowing Omagh move resulted in Daniel McCrossan edging them in front before a brilliant effort from Conor O’Donnell made it four in a row for the St.Endas by the 48th minute. At that stage they looked to have the momentum but Dromore refused to throw in the towel with Teague converting a twenty metre free from the left wing.

The lively McCusker then levelled matters before a ball across goal from Emmett McNabb was retrieved by Nathan McCarron who fisted over the lead point for the St.Dympnas. O’Neill and Teague exchanged points from frees before Omagh midfielder Micheal Gallagher equalised deep into injury time to send the contest to extra time.

Dromore had lost the influential McCusker to a second yellow card just before the end of normal time but they were able to get back up to their full compliment of players for extra time. Omagh substitute Michael Flanagan got the first point of extra time but Emmett McNabb quickly cancelled that out before impressive substitute Ronan [Magpie] McNabb put Dromore in front. Things looked to be going Dromore’s way at that stage but in the 7th minute of extra time O’Neill tucked away a penalty in style to the bottom left hand corner of the net after substitute Cathal McCarron had been fouled.

Dromore though lifted their game with Emmett McNabb offloading for centre half back Ryan McCusker to point before Sean McDonnell sent over the equaliser from a free after fellow substitute Ronan McNabb had been fouled. It was Omagh though who had the final say in the first period of extra time with O’Neill providing the pass for O’Donnell to hit a beauty for a 2-10 to 1-12 lead.

McDonnell levelled matters from another free before Teague supplied the score of the game in the 4th minute of the second period when he cut in from the right past a couple of players before landing an outstanding point with his weaker left foot. When you have a player like Ronan O’Neill in your side though you are always dangerous and a patient build up from Omagh resulted in an outstanding equaliser from the Tyrone attacker. In the 6th minute Dromore got their second goal of the contest when Teague and Ronan McNabb combined for substitute Andrew McGrath to finish to the net. Omagh had it all to do now to break down a Dromore defence that had stars in Conor O’Hara, Colm O’Neill and former Tyrone star Ronan McNabb.

O’Neill won a free which he knocked over himself and when substitute Conan Grugan won a free as well after taking a fine catch there was O’Neill again to oblige from the placed ball to make it a one point game. At that stage penalties looked a possibility but Dromore had other ideas. Magpie McNabb went on an unbelievable 60m run straight through the Omagh defence and when he was met by keeper McGinn he had the presence of mind to fist the ball across for the inrushing Sludden to palm to the net to win the game. The hard working Sean McNabb then had the final say with a fine point as Dromore made it through to the last eight.