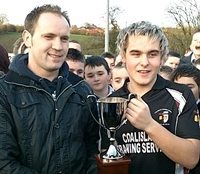 Darragh Begley from Begley Sports Dungannon was on hand this afternoon in Killeeshil to present the Tyrone U16 Vocational Schools title for the second year in a row to St Joseph’s College Coalisland. The St Joseph’s lads won out on a scoreline of 2-7 to 0-8 thanks mainly to a goal in either half from Gerard Woods and Macauley Quinn.  Teamtalkmag.com was there to capture the moment the trophy was presented.