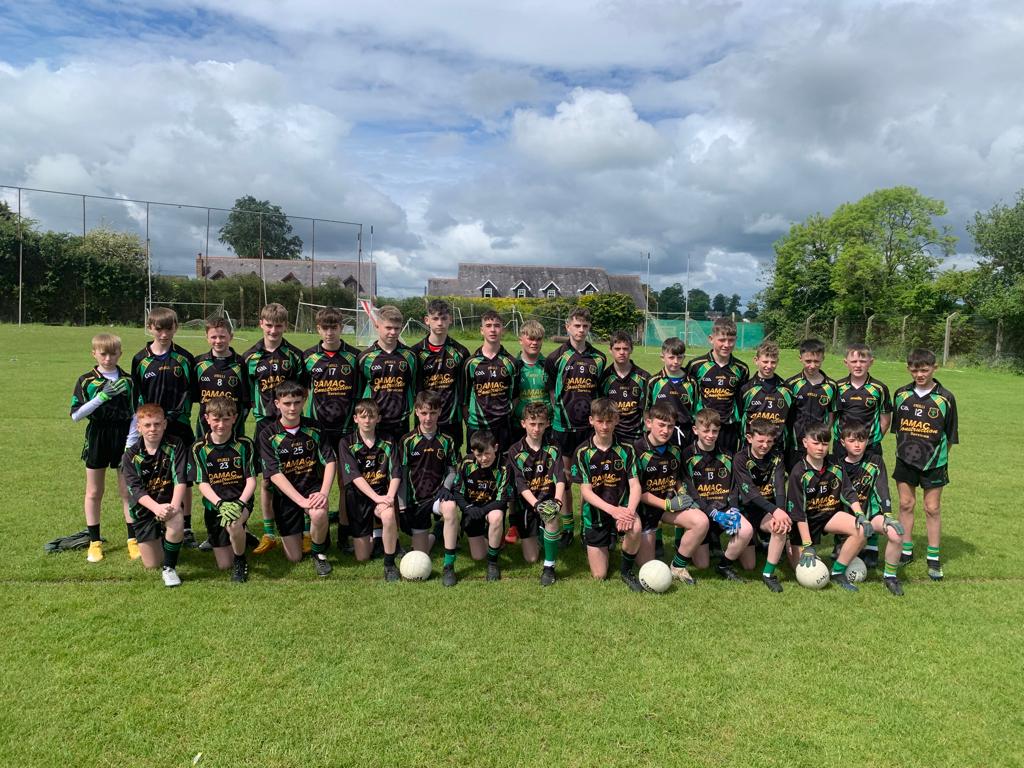 There was high drama at the Tir Na nOg grounds in Portadown this afternoon as St.Mark’s Warrenpoint stunned Dean Maguirc Carrickmore to win the Danske Bank Ennis Cup after extra time. Last week a goal with the last kick of the game resulted in a cup win for Dean Maguirc. This time around however they were the recipients of a similar ending as St Mark’s came back from six points down with time almost up to plunder a brace of goals from John Joe O’Hare and Shay Traynor to force the game into extra time. The Down side were superb in extra time as they produced their best football of the game to claim the title on a score line of 6-10 to 2-11.

The Dean led early on thanks to points from Pheilm McCrory, Ciaran McCrystal and Vincent Gormley but an O’Hare brace either side of a Sam Murdock goal saw Warrenpoint edge in front at the end of the opening quarter. Playing wind assisted the Dean Maguirc closed out the first half on top and points from Sean Donnelly, McCrory, Lorcan Meenagh and Gormley saw them take a narrow advantage to the changing rooms, 0-7 to 1-3.

The Dean bossed the second half with tenacious defending, ferocious tackling and superb support play. Cal Mc Aleer, Dan Heagney, Ciaran Mc Crystal and Padraig Loughran repelled almost everything the Down lads could throw at them. Conan O’Brien opened the scoring for Carrickmore and that was quickly followed by a Sean Donnelly goal. O’Hare then got his first major of the afternoon but Dean Maguirc were looking the better side and points from Meenagh and Michael McCallan coupled with another Donnelly goal left it 2-10 to 2-4 by the 57th minute.

Six points up and the clock showing thirty one minutes of the second half played it seemed there was only one possible outcome to the game. However the Warrenpoint lads demonstrated great resolve as they sought a way through. John Joe O’Hare hit the net to give them hope before Shay Traynor netted to tie the game right at the death and take the game to extra time.

Those two scores no doubt deflated Dean Maguirc and despite having the wind at their backs in the first period of extra time they failed to score. St.Mark’s on the other hand had points from Dylan Kelly and Murdock (2) before a late Robbie McGowan goal left it 5-7 to 2-10 at the turnover.

Meenagh opened the scoring in the second period but that proved to be the Dean’s last point of the contest. Warrenpoint were well on top at this stage and they made their dominance count on the scoreboard with points from O’Hare, Jimmy Haughey and Paudie Fitzgerald as well as a goal from Ben Mulligan to take the title.