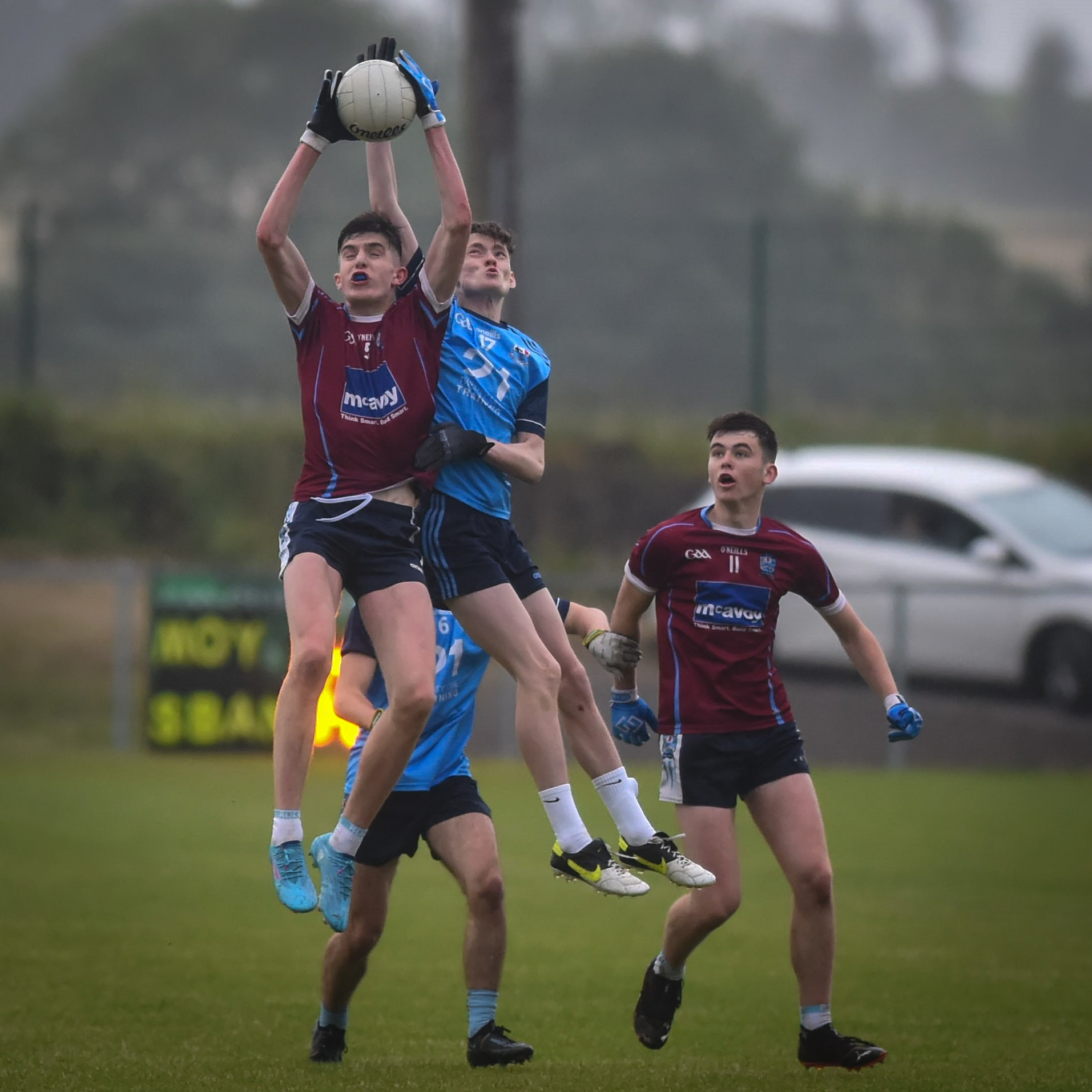 A never say die attitude and a desire to play to the end landed Strabane the Grade 2 U19 League title in Augher on Monday night.  Trailing by two points in the 5th minute of injury time Eoin Haire who was moved from goalkeeper to full forward slammed home a brilliantly taken goal to give the north Tyrone men a one point victory.  It was an incredible finish to a game that rose slowly to the boil as the finish whistle approached.

Moy looked like the side more likely to secure the win as they opened up a 1-8 to 1-0 margin by the 26th minute of the game.  Eoin McGeary opened the scoring for Moy in the 3rd minute ahead of points from Ryan Laverty and Connor Mackle.  That three point advantage soon turned to six.  Ryan Loughran finding the space to dispatch the ball to the Strabane net in the 10th minute.

Strabane hit back with a goal less than three minutes later.  Full forward Kevin Nelson firing home past a stranded Moy goalkeeper.  Moy responded brilliantly though and hit fours points in a row keeping Strabane scoreless for some 18 minutes.  First Eoin McGeary hit a free followed by a Ronan O’Hanlon point, Ryan McCance score and a second from McGeary.  Strabane were in trouble at this point but Oran McGrath stepped up and hit a 45 followed by another free in the 29th minute to reduce the gap.  The last two scores of the half came from Ryan Loughran for Moy and Kelvin Nelson for Strabane.  Half Time Score – Moy 1-8 Strabane 1-3.

With the words of team managers Dean Molloy, Sean Barkley, Ryan O’Kane and Richard O’Neill ringing in their ears the Sigerson stormed into the second half dominating proceeding for the opening 18 minutes.  Oran McGrath hit the first two points, before captain Oisin McGillion clipped over a point.  That score was followed by another Oran McGrath free in the 41st minute.

Strabane might well have hit a goal during that period were it not for an excellent save from Liam Kelly in the Moy goal.  McGrath landed a 47 metre free to level the game in the 46th minute and two minutes later the Sigersons took the lead for the first time in the contest thanks to a second Oisin McGillion point from play.  Connor Mackle stopped the rot for Moy less than sixty seconds later and by the 54th minute the east Tyrone men had restored the lead.  Eoin McGeary landing a close range free.

An Oran McGrath free five minutes from the end of normal time levelled the match again but Moy hit the next two scores through Connor Mackle and Ryan Lavery to edge two points ahead.  As the game entered deep into stoppage time Strabane looked dead and buried.  The players on the pitch thought otherwise.  Man of the Match Oran McGrath launched a long ball into the heart of the Moy defence and up popped Eoin Haire to ram the ball into the Moy net.  Haire had been moved from goalkeeper to full forward earlier in the game.  Full Time Score – Strabane 2-10 Moy 1-12