The death early on Saturday morning last of Andrew O’Neill left a family and community deeply stunned at the tragic news. Andrew was a second year quantity surveying student at John Moores University in Liverpool and died after being knocked down by a stolen car driving the wrong way down a one way street. 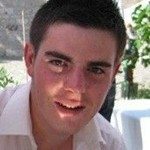 He was a member of Naomh Colm Cille Hurling club and was described by his underage manager Eamon Mc Girr as a lad with a great attitude to training and to the game.

“He was a great corner back with an exceptional attitude who led by example. Andrew was not a man to beat his chest in the changing room but he led by example when it was needed. He had a great sense of humour and was very quick with a witty remark.”

Andrew played hurling for the club right through underage teams and was also a member of Tyrone underage Hurling Development squads in the past. This is the second tragedy to hit the club following the sudden death of Brian Taggart just over seven months ago. At this stage the arrangements for the return of Andrew’s remains are unknown but for the people of Clonoe and the surrounding district the immediate difficulty is in coming to terms with the death of this very popular young man. Our thoughts and the thoughts of all the Gaels of Tyrone are with Andrew’s family at this very sad time.