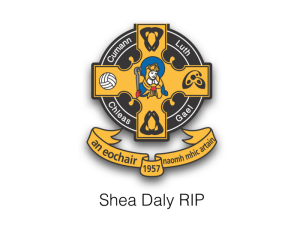 Seamus Daly was a builder by trade and he brought to his work the same sense of dedication and commitment that he displayed on the football pitch. Like many former players of his generation he remained a keen follower of Gaelic games and always had time for a chat and a laugh when you met him at matches across the county.

News of his death on Wednesday was met with shock, sadness and regret across Augher and Tyrone. Shea was part of the famous Augher St. Macartans side that won three senior championships as well as senior and intermediate league titles during the seventies and eighties. He was a versatile, stylish and hard working player who was respected by all who played against him or with him.

He was fortunate to play at a time when the Clogher Valley side were one of the best not just in Tyrone but in Ulster. He could have played in any position from half back to full forward but was probably best suited to the middle of the park where his ability to field a high ball or provide an outlet when a team mate was in trouble helped make him a real asset to any team he lined out for.

Seamus played football for Tyrone at all levels from minor through to senior but his proudest moment in the white and red of his beloved county came in 1984. The affable Shea was part of the Ulster Senior Championship winning side that lifted the Anglo Celt Cup and Dr Mc Kenna Cup during the GAA’s historic Centenary Year. That memorable win bridged an eleven year gap from Tyrone’s last provincial title and helped lay the foundations for later successes.

To his family and many friends we offer our most sincere condolences and our prayers at this difficult time.