Home | Trillick Through In Penalty Shootout

Trillick Through In Penalty Shootout 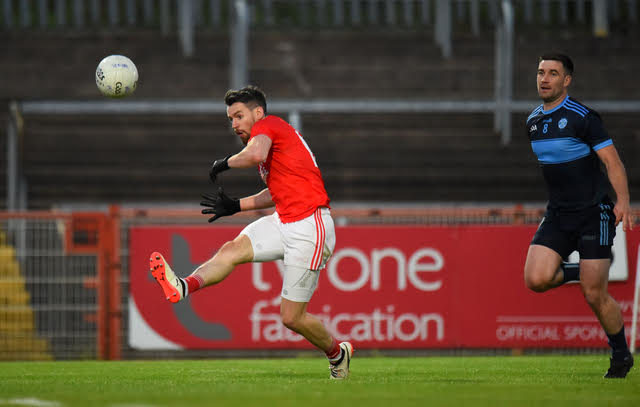 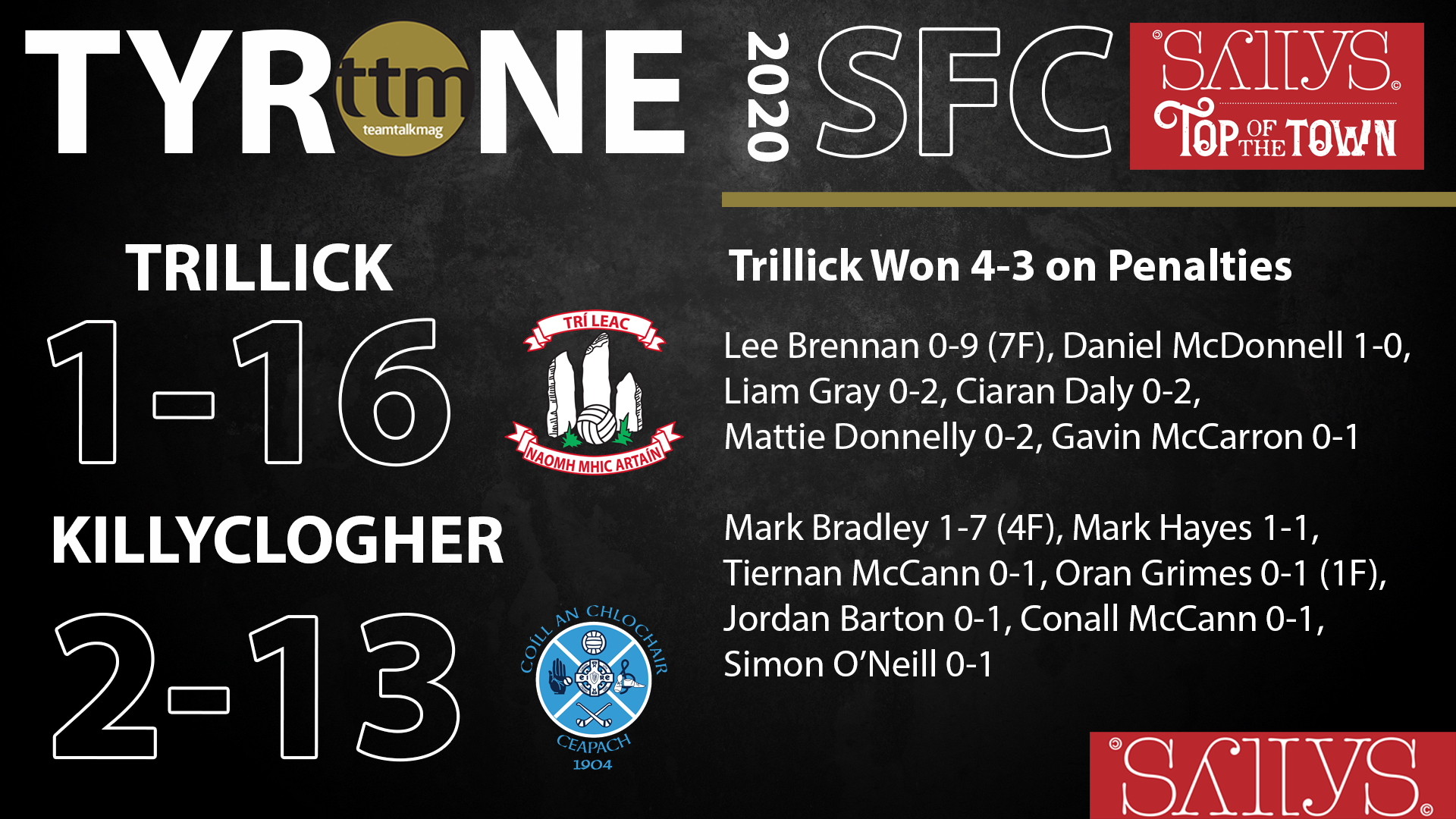 History was made at Healy Park on Friday evening when the first ever championship game in Tyrone was decided on penalties as Trillick edged past Killyclogher in a thriller.

It was an awful way to decide a contest that had everything that is good about the cut and trust of Tyrone football. Twice during the game the defending champions recovered from the hammer blow of conceding a goal and in the end they came out on top in the penalty shoot out to help banish their defeat in the Ulster championship by Derrygonnelly last season by the same method.

Killyclogher were out of the traps quickly with points from Mark Bradley and Conall McCann before Trillick opened their account from a 7th minute Lee Brennan free. Three minutes later Killyclogher struck for their first goal when Matthew Murnaghan intercepted a pass in midfield and burst forward before offloading for Mark Hayes to drill the ball low to the net. Brennan and Tiernan McCann swapped points before Trillick grabbed a 13th minute goal when Daniel McDonnell somehow found the net despite appearing to have been bottled up.

Sharpshooters Bradley and Brennan exchanged points before Trillick midfielder Liam Gray took a good point from play from distance. Hayes left two between the sides but Brennan converted two frees before Trillick substitute Ciaran Daly put his side in front for the first time with a terrific effort with the outside of the boot from the right wing. For once Brennan was off target with a goal chance but the full forward had the final say of the first half from a free as Trillick led 1-8 to 1-6.

Bradley took a point from long range within sixty seconds of the restart before Brennan and wing half back Jordan Barton exchanged scores. In the 36th minute a brilliant ball from Nathan Donnelly released Bradley and there was going to be only one outcome as he finished in style past St.Macartans keeper Ryan Kelly. Daly and Bradley both kicked superb points for their respective sides before a brilliant long range free from keeper Oran Grimes left Killyclogher three in front going into the final quarter.

Trillick though were far from finished and within four minutes they were level thanks to efforts from Brennan, defender Gavin McCarron and Mattie Donnelly. Bradley edged Killyclogher in front with his weaker right foot but that was quickly cancelled out with another fine effort from Gray. Both sides had chances in injury time but it ended up a draw at 2-11 to 1-14 and so we had extra time.

Simon O’Neill put Killyclogher in front with a point from forty metres out but Donnelly got Trillick’s only score in the first spell of extra time with a superb score. Killyclogher had the final say of the first period with a Bradley free as his side led 2-13 to 1-15.

The second period of extra time saw both sides miss changes but more so Trillick as they finished the contest with fifteen wides to their opponents five. It was Brennan who had the final say of the contest with a straight forward free to leave it 2-13 to 1-16 and the dreaded penalty shootout.

Trillick went first with Niall Gormley converted with Bradley replying. James Garrity put Trillick in front before Simon O’Neill dragged his kick wide off the target. Killyclogher keeper Grimes then made a great save to dent Brennan before the former turned around and levelled matters when converting his spot kick past opposite number Kelly. County colleagues Mattie Donnelly and Conall McCann both made no mistake before Proinsias O’Kane put Trillick back in front. The pressure was now all on Niall McFadden and his last kick was well saved by Kelly as Trillick advanced but it was no way to decide a game between two superb teams.