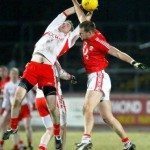 This will be a first competitive runout for Augher player Aidan Cassidy since suffering a serious ankle injury while playing for his club in a league match against Loughmacrory. His pairing with Sean Cavanagh at midfield is sure to attract a lot of interest and it is hoped a large crowd will turn out at Healy Park to support the team as Tyrone take to the pitch for the first time following the tragic death of Michaela Mc Areavey.