Home | Two Out Of Two For Tyrone

Two Out Of Two For Tyrone 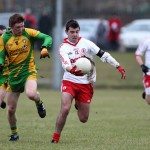 Tyrone took a major step towards securing their place in the McKenna Cup semi final when they defeated Fermanagh 2-11 to 0-11 at Brewster Park on Wednesday night. It wasn’t one of the Red Hands better performances but when it was needed they stepped on the gas in the final quarter of an hour landing five unanswered points. It was the Erne men who made all the early running and by the 24th minute they had established a 0-5 to 0-1 lead and were full value for it with Paul Ward, Hugh Brady and Tomas Corrigan on target, Sean Cavanagh with Tyrone’s sole response. Despite playing second fiddle the visitors managed to go in on level terms at the break [1-3 to 0-6] with Martin Penrose expertly dispatching a 28th minute penalty to the top left hand corner of the net after Brian McGuigan had been fouled.

Six minutes into the second half Tyrone struck for their second goal when Ciaran Gervin showed great composure to pick his spot as he soccer styled the ball past keeper James McGrath. Fermanagh’s response was immediate with Corrigan, Peter Sherry and Tommy McElroy all hitting points in a blistering two minute spell. Paddy McNeice then weighed in with a superb score and even though Corrigan restored parity a fisted point soon after from McGuigan gave Tyrone a lead that they were never to lose.  In that closing quarter of an hour there was only one side it in as points from Cavanagh, Penrose and wing back Davy Harte saw the visitors win comfortably enough in the end.