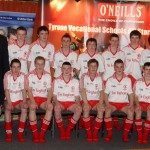 This is the second year of these awards that helps to showcase the vocational football sector that is so vibrant and laden with quality.

Originally scheduled for pre-Christmas, all involved deserve great credit for their patience in bringing about a top-notch evening.

Guests enjoyed a nice meal before the business of revealing the All-Star squad came to pass.

Kieran Kennedy and Terry McCann had the happy task of making presentations of superb trophies and kits to each winner.