Holders Tyrone began the defence of their Ulster title with a win over Cavan at O’Neills Healy Park on Saturday evening but it was a much closer contest than the eight point winning margin might suggest.

Only three points separated the two sides at the break with Captain Eoin McElholm getting the Red Hands goal and when Charlie Donnelly found the net in the opening attack of the second half it looked as though Tyrone would ease to victory. Cavan though had other ideas and a number of points brought them back into contention before Noah Grimes got a third Tyrone goal. Moments later though Cavan pounced for their goal as they certainly made Tyrone fight hard for their win but the hosts came through and they will now face Antrim next day out with the winner of that tie advancing to the semi finals.

Cavan began brightly with early points from Ben Tully and Oliver McCrystal before Grimes opened Tyrone’s account in the 5th minute. The next kick out was won by McElholm and he burst through to finish to the net past Cavan keeper Cillian Brady. Lorcan Reilly and Grimes swapped points before Cavan got back on level terms by the 10th minute thanks to efforts from Matthew Smith and Cian Keaney. A well taken Donnelly point edged Tyrone back in front only for his opposite number Smith to level matters from a free off the ground.

Smith then knocked over the first of his three 45s on the night as the visitors got their noses back in front. That proved to be their last score of the half though as Tyrone finished strongly. McElholm skipped past two tackles to split the posts before Michael McElhatton gave the home side a lead that they were never to lose. Ruairi McCullagh then got his name on the scoresheet before centre half back Callum Daly had the final say of the first half to leave it 1-7 to 0-7.

The second half was only thirty seconds old when Tyrone got their second goal. Conor O’Neill, who got through an ocean of work in midfield, began the move that saw Caolan Donnelly and Charlie Donnelly involved with the latter sending the ball to the net. Wing half back Nathan Farry then put seven between the sides before Cavan fought back. Tully and the impressive Michael Smith both registered before Cormac Galligan hit a beauty with the outside of his boot to leave the scoreboard reading 2-9 to 0-10.

Smith then cut in from the right wing and sold a great dummy before pointing as Cavan enjoyed their best spell of the game. McElholm got a much needed Tyrone score with his weaker left foot but back came Cavan with efforts from Matthew Smith and Keaney to leave only a single score between the sides, 2-10 to 0-13. Tyrone though didn’t panic and the twin threat of Grimes and McElholm added points before the former got their third goal. That was in the 23rd minute but Cavan came straight down the field from the next kick out for Keaney to finish to the net from close range. 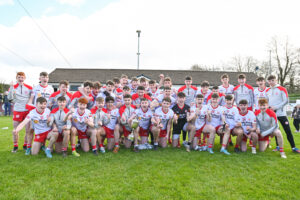 That proved to be their last score however as Tyrone upped the tempo to close the game out. McElholm went past three defenders to hit a brilliant score and after a Charlie Donnelly brace McElholm followed that up with another two of his own as the hosts landed the last five scores of the game.