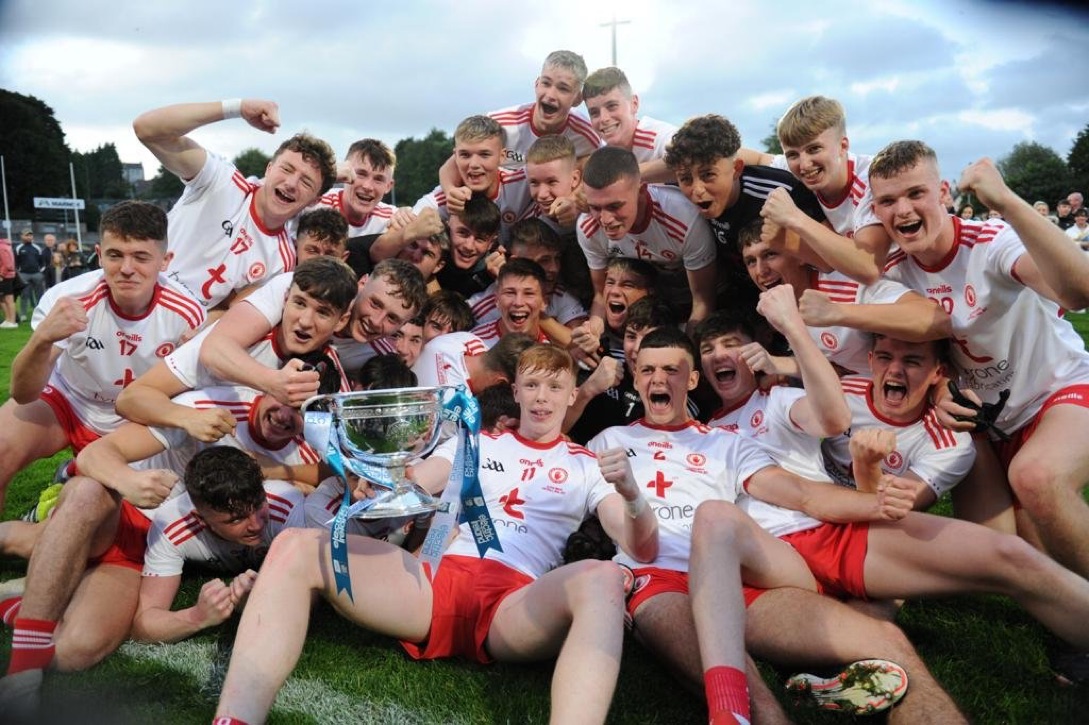 Tyrone justified their favourites tag at Brewster Park in Enniskillen on Friday evening to defeat a battling Donegal side to claim the Electric Ireland Ulster minor title.

In the end seven points divided the two sides but for long spells it was a lot closer than that. That was due in no small measure to erratic shooting from the winners as they hit fifteen wides over the course of the sixty odd minutes. Tyrone lost midfielder Ruairi McHugh to a black card offence in the 42nd minute but crucially despite being down to fourteen men they struck for two goals in the space of sixty seconds to end the Donegal challenge. Their reward is an All Ireland semi final meeting with Munster champions Cork.

Tyrone led 0-7 to 0-3 at the break but they should have had a more comfortable advantage as they kicked ten wides to their opponents three. The Red Hands were out of the traps quickly with team Captain Cormac Devlin splitting the posts after only twenty five seconds and that was quickly followed by a point from Ronan Strain in the next attack.

Kevin McCormack then opened Donegal’s account in the 14th minute and by the end of the opening quarter they were on level terms thanks to an effort from Daniel Marley.

Tyrone though were still looking the better side but a number of wides meant that they failed to turn possession into scores. Eoin McElholm put Tyrone back in front with a point from a mark straight after the water break before full forward Paddy McCann had a goal chance but Donegal held out.

Wing half back Sean Martin then took a pass from Paddy McElwee to land a neat equaliser but that proved to be Donegal’s last score of the opening period. McElholm blasted a goal chance wide before Devlin got them a much needed score.

That seemed to lift Tyrone and in the five few minutes of the half they at last began to find the range. Gavin Potter hit an inspirational point from out on the right wing before midfielder Ronan Donnelly scored from distance.

Tyrone now had the bit between their teeth and Ronan Cassidy turned sharply to kick a superb score. Donegal were on the ropes at this stage and there was no doubt that halftime came at a good time for them.

Substitute Michael Callaghan closed the gap on the restart before Sean Ward left just two between the sides. McElholm and Cassidy both had points either side of the second water break before Donal Gallagher replied for Donegal.

Only a score separated the two sides at this stage but then came the crucial spell in the game when substitute Conor Owens blasted in a goal after taking a pass from McElholm before an outstanding Cassidy pass found Devlin who fired home. Karl Molloy did find the net for Donegal late on but it was only a consolation score.