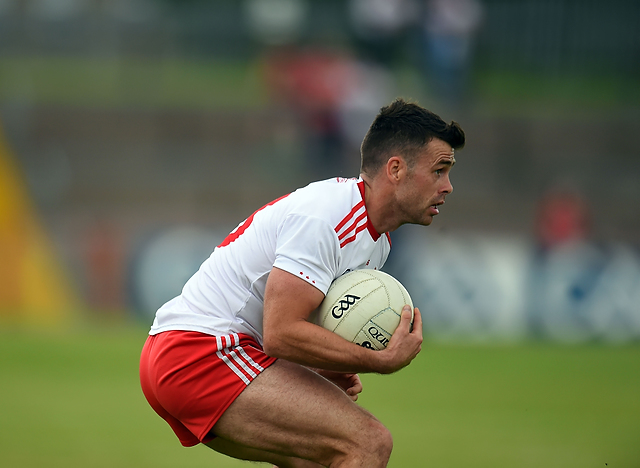 Tyrone justified their favourites tag at O’Neills Healy Park on Saturday evening to end Cavan’s reign as Ulster champions and set up a semi final meeting with either Donegal or Derry next Sunday in Enniskillen.

At the end of the day it was a case of mission accomplished for the joint management team of Fearghal Logan and Brian Dooher as they guided their charges to victory in their first championship game at the helm. It was 0-7 apiece after twenty five minutes but a run of 1-5 without reply either side of the interval sent the Red Hands on their way to victory. At the end of the day it was a professional performance from Tyrone as they got the job done and there were a number of positives on the day despite the blow of losing full back Ronan McNamee to a harsh straight red card in the 55th minute. Conn Kilpatrick had a solid game in midfield on his championship debut, Darren McCurry weighed in with 0-10 while there was a welcome return to action for Cathal McShane after injury and he contributed three points.

Tyrone led 0-11 to 0-7 at the end of a lively first half with the superb McCurry very much to the fore, the Edendork clubman landing seven points. It was McCurry who opened the scoring from a free before Oisin Pierson levelled matters, By the 6th minute the home side were two points to the good thanks to efforts from Richard Donnelly and another McCurry placed ball.

The defending Ulster champions though began to come into the game and after Gearoid McKiernan had narrowed the gap from a free the same player levelled matters with a fine point from play. Thomas Galligan then charged through the Tyrone defence to drill over as the visitors made it three points without reply. Paul Donaghy then got his name on the scoresheet with a quality point from distance before the impressive McCurry split the posts again.

Cavan though were giving as good as they got with Gerard Smith knocking over a brilliant point from out on the right wing which was quickly followed by another successful McKiernan free. McCurry and McKiernan traded points but with Conn Kilpatrick a major influence at midfield the Red Hands began to get on top.

Kilpatrick played a great ball through for clubmate McCurry to turn sharply and dissect the posts before the hard working Niall Sludden pointed. At that stage Tyrone took over playing some nice attacking football. Peter Harte pointed from distance before McCurry had the final say of the opening period from a placed ball.

McCurry picked up where he had left off on the restart with another point before a sweeping move in the 5th minute of the second half resulted in substitute Brian Kennedy grabbing the only goal of the game. McKiernan stopped the rot for Cavan from a free before McShane entered the fray to the biggest cheer of the day.

The Owen Roes man took a pass from Kennedy to point before the same player won a free which McCurry converted. Cavan keeper Raymond Galligan converted a free before substitute Conor Smith pointed. Tyrone then lost McNamee to a red card and Cavan started to go more direct after that. Sludden and Smith exchanged points as did McKiernan and McCurry. In injury time McShane pointed from a free and from play either side of an effort from Conor Madden as Tyrone safely made it through to the last four of the championship.