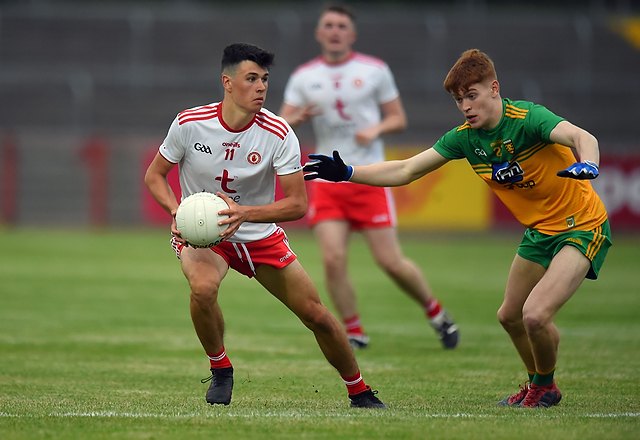 Tyrone under 20s exited the championship at O’Neills Healy Park on Friday night when Donegal saw off the Red Hands challenge to win 1-12 to 1-9. Tyrone led for the only time in the game after a Luke Donnelly point five minutes into the contest but Eoin Dowling’s goal for the Tir Chonail lads three minutes later put them in front and they remained that way until the final whistle.

Tyrone will feel however that, in spite of not playing particularly well, they let this one get away from them. They missed several good chances for goals and rushed opportunities for points which ultimately decided the outcome of the contest. Indeed late in the game substitutes Daniel Fullerton and Michael Mc Gleenan caused havoc in the Donegal defence as Tyrone chased the game but unfortunately for the home side all their endeavour came to nothing.

Luke Donnelly and  Odhran Robinson impressed up front while Oisin Mc Cann, Neil Kilpatrick and Ronan Duffin worked tirelessly for Paul Devlin’s side. However after that Donegal first half goal they were always playing catch up and in truth Donegal looked sharper and quicker to the ball all over the field. Jamie Grant, Jack Gallagher and Rory O’Donnell were outstanding for their team in defence while Eoin Downing, Shane O’Donnell and Padraig Mc Gettigan caused problems for the Tyrone defence throughout the game.

After a low scoring start an Oisin Mc Cann point after twenty one minutes narrowed the gap to one 0-4 to 1-2 as Tyrone began to enjoy more possession. Donegal midfielder Mc Fadden and Red Hand full forward Robinson exchanged points but then came one of the major turning points in the game when the Tyrone number fourteen was most unfortunate to receive a black card just before the break. The Errigal man had been getting the better of Grant in the Donegal full back line and his absence certainly was a decisive factor in Donegal going in at the break leading 1-6 to 0-6 following late points from Johnny Mc Cruddy and Shane O’Donnell.

Donegal dominated after the break hitting four in a row and Tyrone looked all at sea. Mc Gleenan and Fullerton were introduced from the bench and the Red Hand cause was given more impetus. Luke Donnelly converted a free before a mistake in the Donegal defence was punished by Rory Donnelly netted to leave three between the teams 1-10 to 1-7. Luke Donnelly pointed again to reduce the gap to two and Tyrone created several chances to narrow the gap even further but a lack of composure at key moments allowed Donegal off the hook.

Tyrone threw caution to the wind and poured forward in search of the scores that might save the game. However Donegal remained resolute and the visitors broke from defence to add late points from Nathan Byrne and Mc Croddy to seal the win.