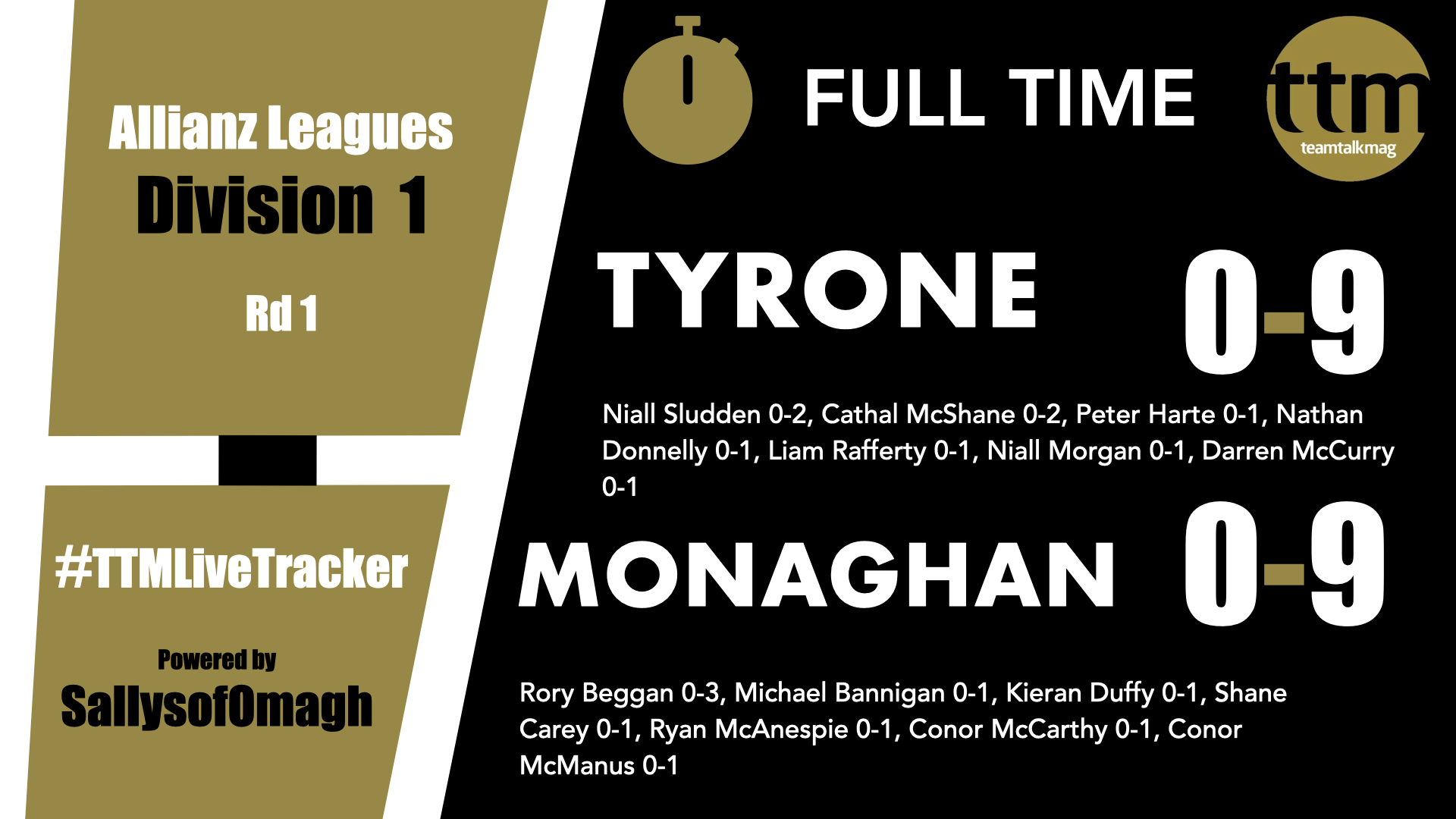 Tyrone opened the scoring in the 3rd minute thanks to a nice sidestep from Peter Harte and a long range point from play.  Monaghan responded within two minutes.  Kieran Duffy joining the attack to slot a point from play.   Tyrone regained the lead in the 12th minute as Cathal McShane kicked over his first free of the League campaign following an off the ball foul on Darren McCurry.  Rory Beggan cancelled that out in the 14th minute landing a long range free from the 45 metre line.  Sides level at 0-2 apiece.

As conditions worsened Niall Sludden popped up down the right hand side to find the range from play and when debutant Nathan Donnelly added another from play in the 17th minute Tyrone found themselves two points up.  That lead became three in the 20th minute following a robust tackle on Cathal McShane which Joe McQuillan deemed illegal.  McShane converted that free himself.

Monaghan kept Tyrone at armslength for the next ten minutes.  They added two scores in the that period through Shane Carey and a Michael Bannigan free. Tyrone did manage to complete the first half scoring and take a lead into the break.  Niall Sludden slotting a long range point.  Half Time – Tyrone 0-6 Monaghan 0-5.

The second half was ruined by some very inclement weather.  Liam Rafferty eased Tyrone into a three point lead in the 37th minute with a point from close to the goals ahead of four points in the row from Monaghan. First Ryan McAnespie split the posts, then Rory Beggan landed a 30 metre free before Conor McCarthy levelled the game in the 42nd minute.  0-7 each.

Beggan put Monaghan in front with 20 minutes to go.  His first ever score from play for the Farney men.  Two minutes later Tyrone number one Niall Morgan kicked Tyrone level from a twenty five metre free.  His clubmate Darren McCurry put Tyrone back in front in the 56th minute but Monaghan levelled up once again thanks to a long range point from play from substitute Conor McManus in the 65th minute.

Monaghan might well have won the game at the death, but Rory Beggan turned down the long range free opting instead to play the play short to full back Conor Boyle.  His shot was timid and easily handled by Niall Morgan ahead of the final whistle.

A battling point for the Red Hands in a tempestuous contest.  Final Score – Tyrone 0-9 Monaghan 0-9