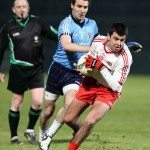 Tyrone will play Cavan in the semi final of the McKenna Cup on February 12th after they ensured top spot in section A with a four point win over a battling UUJ side at Healy Park on Saturday night.

It was an entertaining and competitive encounter from start to finish with Brian McGuigan’s goal in the 17th minute of the second half proving to be the decisive score on the night.

The hosts started the better with Martin Penrose continuing his good early season form with the opening two points of the contest. Emmett McGuckin then opened the students account and in the 13th minute they struck for a goal with Christy Young playing the ball to Mattie Donnelly who first timed it to the net past keeper Johnny Curran.

Tyrone though wasted no time in drawing level with Sean Cavanagh converting a free and Paddy McNeice taking a fine score with his weaker right foot. It was end to end stuff with Ryan Pickering joining the attack for a well taken point only for Cavanagh to land a brace of frees at the other end of the field.

Dermot Carlin surged forward from centre half back to point for Tyrone and the biggest cheer of the opening half came when Stephen O’Neill marked his first appearance of the season with a superb point.

As the first half slipped into injury time UUJ drew level once again with Conor McManus’s second score of the opening period but it was Tyrone who had the final say of the half through midfielder Aidan Cassidy despite being under severe pressure to leave it 0-10 to 1-6 at the break.

UUJ couldn’t have wished for a better start to the second half as a high ball in from Emmett McGuckin saw keeper Curran go for it but Caolan O’Boyle got there first and after consulting with his umpires the referee awarded the goal. 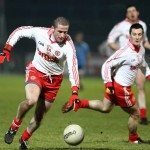 Cavanagh and O’Neill had Tyrone points either side of an effort from UUJ half time substitute Diarmuid McNulty. Cavanagh then equalised from another placed ball before Tyrone struck for a fortunate goal when McGuigan’s attempt for a point looped over the head of UUJ keeper Ciaran Boyce and into the top left hand corner of the net.

Tyrone had their tails up with Penrose and Cavanagh adding to their tally before a point from Ciaran Gervin meant that all of the Tyrone starting forward line had scored.

To their credit UUJ kept battling away with Colm Murney and McGuckin hitting points with McNulty racing through and blasting just wide of the target when a goal was on the cards. Tyrone though refused to panic and points from McGuigan and substitute Mark Donnelly sealed their win.