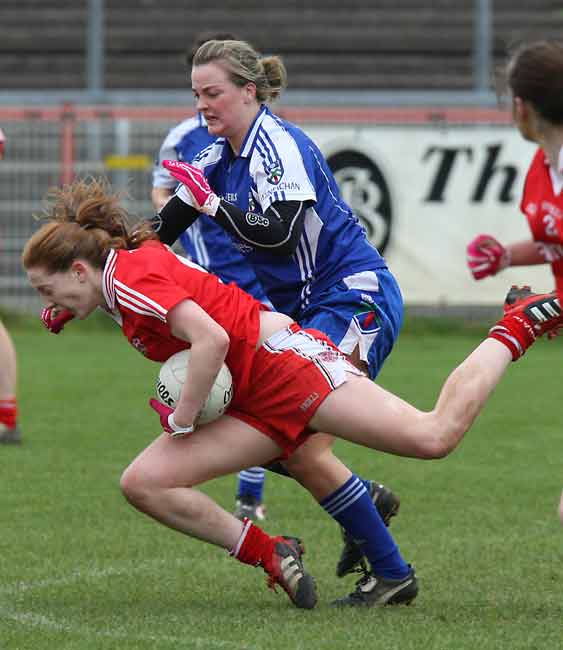 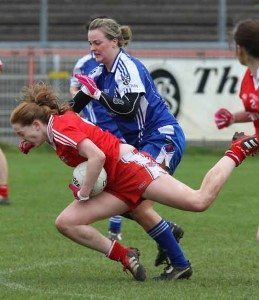 Although they put up a gritty fight of it Tyrone came up short against a Monaghan side that were superior in physicality and quality. The much smaller, lighter Red Hand girls worked their socks off in the first half with Maura Kelly, Lynda Donnelly and Shannon Quinn battling hard for their side. The Farney girls led 0-4 to 0-3 at the break and were made work all the way for their lead by Tyrone. However it was Monaghan who started the second half stronger and points from Kindlin and Kierins gave the visitors enough breathing space to allow them to play with a bit more belief. Tyrone continued to work hard but far too often spilled the ball in the tackle or were wasteful with possession. Monaghan continued to dominate and kept the score board ticking over to lead 11 points to 4 with ten minutes remaining. Credit to Gerry Moane’s side they continued to battle and were rewarded with late points from Mairead Conwell and Emma Hegarty. Unfortunately it was a case of too little too late and Monaghan recorded a 0-12 to 0-06 win.
Tyrone are now in a real relegation dogfight and their remaining fixtures will also prove to be tough tests of their abilities. Next up is Donegal away from home with the final fixture being at home to Cork. A win next week would maintain Division One status so the pressure is really on to deliver in this game.