‘Playing for Life’is named as official GAA charity for 2011. 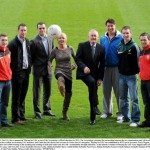 Former Tyrone star John Lynch and two of the present panel Dermot Carlin and Martin Penrose travelled to Dublin to be part of the official announcement by The GAA as they confirm ‘Playing for Life’ as one of the Association’s official charities for 2011.
The Association welcomes the partnership between the two organisations and will work with Playing for Life to further highlight the excellent work among GAA members and Clubs that the charity has overseen in Africa since its inception in 2005.
‘Playing for Life’ was established by RTE Sports Presenter, Tracy Piggott, and has worked with Tanzania, Kenya and Malawi since 2005 focusing on the teaching and training of skills and trades and also self-sustainability through education.
In addition to a host of home based initiatives the organisation also brings groups of volunteers to Africa to assist in local projects and one such group visit is planned for the end of 2011.
Uachtarán Chumann Lúthchleas Gael Criostóir Ó Cuana lauded the work undertaken by the Association’s newest official charity and wished it every success in its on-going endeavours.
He said: “There is a lot of interest in these positions from a wide range of excellent charities on an annual basis but we are delighted to announce our link up with Playing for Life for 2011.
“It’s worth noting the plans that Playing for Life has for the remainder of 2011 and I hope we can support them in a tangible way with this excellent work. I am also pleased to see so many GAA faces involved – both past and
present players among them. The efforts of Playing for Life help to benefit and improve the fortunes and quality of life for many people that are not as well off as Irish people.”
“I am confident that our members and Clubs will support our commitment to this charity in whatever way they can over the next 11 months.”
Tracy Piggott, founder of ‘Playing for Life’, commented: “As a team, we are extremely honoured, proud and pleased to have been named the GAA’s charity of the year. Over the years, we have had tremendous support from the GAA community throughout the country. On both a national and international level, Playing for Life’s success is a tribute to the support and sponsorship it receives, we are so thankful to the GAA for providing us with a platform this year to ensure that this success continues.”
‘Playing for Life’ replaces the Alan Kerins Africian Projects. Visit the ‘Playing for Life’ website at http://www.facebook.com/l/6c896XDg1GG95IV7cZNHqvruokQ/www.playingforlife.ie.