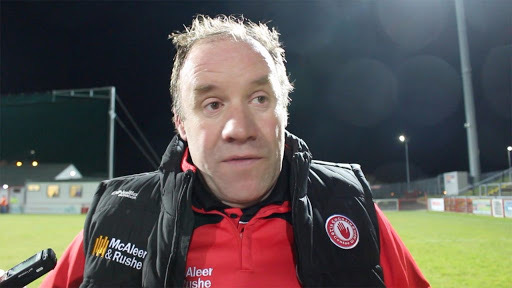 Tyrone were forced to dig deep late in their game with Monaghan on Saturday evening before a last minute point by the Farney men to earn a draw also secured Tyrone’s place in the semi finals of the Allianz League Division One.

Monaghan certainly deserved something from the game having out fought and out thought their opponents for most of the second half. Indeed as the game entered the closing stages they looked set for victory leading Tyrone by three points. Tyrone were forced to dig deep and in spite of taking the wrong options on several occasions they created and converted the chances that saw them lead with only one minute of the seven additional minutes remaining.

With so much at stake it was expected that both teams would be going flat out for the win. Tyrone enjoyed the majority of possession and chances in the first half and really should have reached the break further in front than three points. It was a tough, competitive game and referee David Colderick had his hands full. He issued two black cards to both sides in addition to showing quite a few yellow cards.

Tyrone’s scoring ace Darren Mc Curry delivered the Red Hands first point of the day but this was soon cancelled out by the industrious Conor Mc Manus who opened his team’s account with a superb individual strike.

Mc Curry pointed again before Pul Donaghy converted a free to put Tyrone two clear. McManus and McCurry swapped scores before Monaghan keeper Rory Beggan converted a far out free to make it a one point game. The big keeper was then called into action between his own sticks when he dived full length to deny Mc Curry a goal with a brilliant stop.

Monaghan though had the final say of the half with a point on the stroke of halftime when McManus knocked over a placed ball.

Monaghan upped the ante right from the start of the second half and with four points in a row were soon in front with McManus, Stephen O’Hanlon, Dessie Ward and Conor McCarthy all on target. The Farney men now had the bit between their teeth and the home side were in bother. They needed a score and full back Ronan McNamee delivered to lift his team. Canavan came close to snatching a goal when he broke through and fired a pile driver that was expertly tipped over by Beggan.

Frank Burns and Jack McCarron swapped scores. Beggan landed a “45” to edge Monaghan back in front. Buoyed by that score they ran at Tyrone at every opportunity and added further points from McManus and O’Hanlon.

At that stage there looked to be only one winner as the Farney men were playing with assurance and conviction. Tyrone had it all to do but with a couple of switches and a real show of character they converted chances from Kieran McGeary, McCurry and Conor McKenna before a great score from Mattie Donnelly put them ahead deep into injury time.

With the clock ticking towards seven minutes Donnelly’s wonder score looked like being the winner but Monaghan had one last chance which Ryan McAnespie took although in the end it wasn’t enough to keep the visitors out of the relegation playoffs.