Home | Tyrone See Off Down Challenge

Tyrone See Off Down Challenge 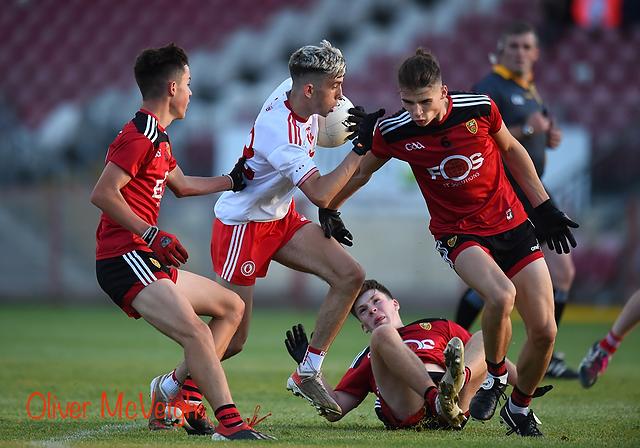 Tyrone minors are  through to the Ulster semi final of the Electric Ireland Minor Championship following a convincing 3-16 to 0-9 win over Down at O’Neills Healy Park on Wednesday evening.

It took a while for Tyrone to blow off the cobwebs of their long break but when they did they looked hugely impressive and played with confidence and composure throughout.

Next up for Gerard Donnelly and his young charges is a semi final clash with neighbours Fermanagh next week back at O’Neills Healy Park. The Ernesiders came back from five down against Cavan in the first half to win by a single point.

Tyrone began well enjoying lots of possession early on but also defended with discipline and organisation when Down managed to breach the scoring area. A surging run straight down the middle from Gavin Potter after five minutes resulted in a goal for the home side. Midfielder Ruairi Mc Hugh added a point before the Down lads finally clicked into gear. Donal Scullion (2) and Michael Murdock pointed to reduce the gap to a point.

Tyrone responded with a second goal following the award of a penalty on twenty minutes. Centre back Shea O’Hare saw his well struck shot superbly saved by Cathal Kinsella but the Ardboe youngster reacted quickest to finish the rebound to the the net.

The young Red Hands dominated from there on with the forwards causing mayhem for the Down defence. Corner forward Eoin Mc Elholm, Gavin Potter and midfielder Mc Hugh added points to stretch the Tyrone lead to six points at the break.

Down looked to be in trouble and in spite of late points from Jamie Doran and sub PJ Mc Keown they went into the break 2-5 to 0-5 behind.

Team captain Cormac Devlin hit five of his team’s first six points after the break with Eoin Mc Elholm assisting with another fine finish as Down continued to struggle with the pace and movement of the Tyrone front six. Full forward Paddy Mc Cann finished a superb Tyrone move to the net as Tyrone went through the gears.

The Red Hands were on top in every sector and Devlin added a further two points as the Tyrone defence denied the Down attack time and again.

Down looked a well beaten side long before the end but full forward Emmet Rogers clipped over a couple of nice scores to keep the scoreboard operative busy. Tyrone added late scores from Mc Elholm, Potter and substitute Conor Owens and were full value for their convincing win.